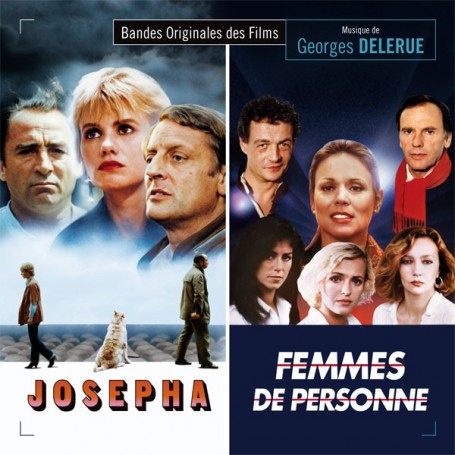 For Josepha, the composer wrote a tormented and serious main theme, recalling the post-romantic atmosphere of Gustav Mahler. Some pieces refer to the more aggressive writing of Andrzej Zulawski’s L’important c’est d’aimer (The Most Important Thing, Love). Georges Delerue also wrote source music for the film such as the salon waltz Valse rococo, the jazz waltz in Josepha et Régis and the combo piece in Ville d’eau.

For Femmes de personne, the main theme takes the form of a relaxed and somewhat nostalgic ballad played on the vibraphone. On the whole, Georges Delerue creates rich meld of evocative jazz, pop and even electronic music with signature romantic and melancholy orchestral scoring.

For this brand new edition, Music Box Records presents the expanded and remastered scores for the two films and includes previously unreleased material. The scores have been fully remastered from the original ¼ master tapes which contain the previously issued LP programs. In regard to the unreleased music of Josepha, we had access to all the stereo music elements stored at EMI, in thundering, crystal clear sound. For the unreleased material of Femmes de personne, we used the composer's back-up tapes (the only source available to this day) and did our best to restore and improve the sound. This present edition includes an 8-page booklet with liner notes by Sylvain Pfeffer, discussing the films and the scores.

Now you can enjoy these two expanded scores with precious unreleased music composed by one of the most gifted European composers for movies.