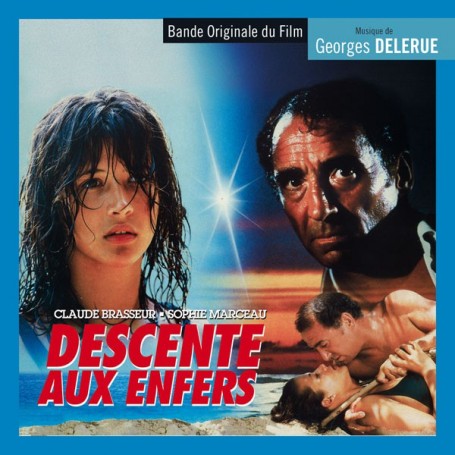 In 1986, despite his good fortune in Hollywood, Georges Delerue would never turn his back to French cinema. Two years after Le Bon Plaisir, he responded to the film director Francis Girod's call for Descente aux Enfers (Descent Into Hell), a psychological thriller set under the sun and heat of the Caribbean and dealing with a married couple at the breaking point - an alcoholic husband (Claude Brasseur) and his 20 years younger wife (Sophie Marceau) - who will unexpectedly manage to get reunited through tragedies and secrets, despite the guilt and sorrow involved.

With Girod's support, Georges Delerue didn't choose so much to illustrate the action of the story than to emphasize the moods of the characters with - most obviously of all - the spellbiding main theme which constrasts with the setting of Haiti soon after the insurrection. Georges Delerue then took many unusual paths, so brillantly diversifying his cinematic interventions both in tone and nature, never reluctant to give them the discreet - yet subtly significant - form of source music. A seductive piano, a bitter sweet flute and tragic strings succesively sound on the verge to succumb to passion. As the listening of the score progresses, a highly coordinated dramatic support unveils itself through a fully assumed heterogeneous tonality.

Music Box Records is proud to announce for the first time available on CD the exquisite selection from the original soundtrack LP Descente aux Enfers, displaying nearly 37 minutes of the score for which Georges Delerue's fans have been longing for so many years.
And to top it all, a totally new 9 minutes bonus material found among Delerue's personal archives was also added. Despite the moderate sound imperfections due to the nature of the original source, those six new tracks extend the pleasure of rediscovering this major contribution to French cinema by Georges Delerue.

« I'm fully aware he composed for me one of the most beautiful film score of its time » later admitted Francis Girod. Precisely 25 years after the movie was released in theaters, this particular CD is now the ideal chance for any music lover to judge for himself.