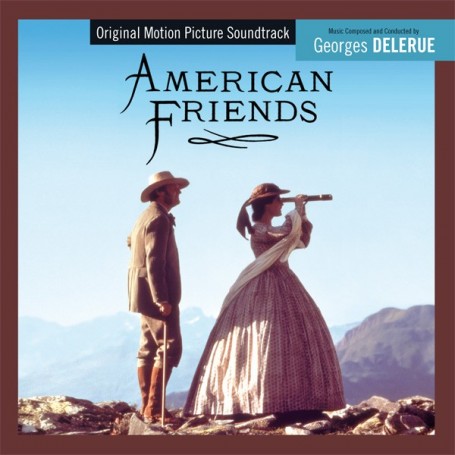 Directed by Tristram Powell, American Friends is a period romance written by and starring Michael Palin. Based on the journals of his great grandfather, Palin's screenplay tells the story of Reverend Francis Ashby, a reclusive Oxford scholar who takes a trip to Switzerland. While hiking in the Alps, Ashby meers Caroline and Elinor Hartley, a wealthy socialite and her adopted daughter who both take an interest in the strange foreigner. When the trip is over, the Hartleys follow Francis back to Oxford where the strict moral codes and restrictions are bound to cause havoc, especially now that Ashby is about to run for an important position at his college...

Transferred from the DAT containing all the recording sessions, the music by Georges Delerue is relatively brief (it's about 40 minutes long), but it contains all the charm and wonder we come to expect from the composer, especially from the later period of his career. Featuring some of his favorite London musicians, Delerue's score benefits from the lush strings section in creating the perfect accompaniment for the picturesque hikings in the Alps - the music is so warm that it's capable of melting the hearts of the most serious gentlemen at Oxford!

The liner notes by Gergely Hubai discuss the film and the score based on original interviews with star/screenwriter Michael Palin, director Tristram Powell and Colette Delerue.