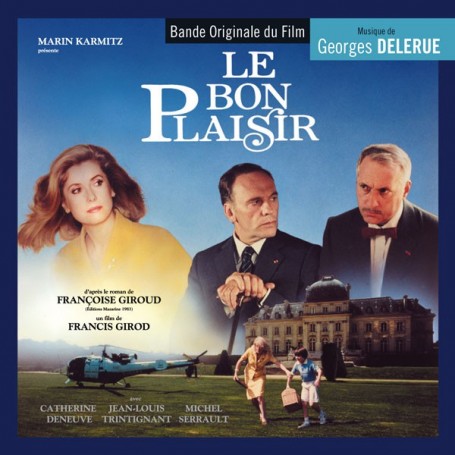 Le Bon Plaisir, directed by Francis Girod in 1984 and based on Françoise Giroud's eponymous novel, deals with the efforts of a President of the French Republic (played by Jean-Louis Trintignant) informed after a number of years of the existence of a son born from an extramarital relationship with Claire, a former mistress (played by Catherine Deneuve) and using the secret services to cover up any kind of proof likely to tarnish his reputation.

For this movie, Georges Delerue's music is far more complex than it could appear. The score is elaborated around four different musical tones, rendering the structure of the film plot : the beginning of the story which establishes a context of power with some pastiches of official music themes; the police enquiry concerning the stolen letter naturally characterized by more mysterious themes; scenes of tenderness between Claire and her son Mike and the President; and then the very intensely dramatic conclusion of the film.

Georges Delerue's score for Le Bon Plaisir is definitely worth numerous listenings, each one more significant than the previous to the perceptive listener who is bound to notice the intuition of a composer implying various layers of understanding.

We keep on releasing Georges Delerue’ soundtracks with a more complete version of Le Bon Plaisir. This expanded edition is available for the first time on CD (39 minutes) with a new sequencing without dialogue of the film. The original LP only offered a 24 minute score mixing together dialogue.

As MK2 did not have the original master tapes, we used the back-up tapes from Delerue’s archives. We did our best to improve the sound and totally reorganized the sequencing of the album with some unreleased material. This CD release has been expanded over the original soundtrack LP by more than 15 minutes.

“As always Delerue produced a haunting work and one which has the unmistakable delicate and poignant musical fingerprint of this French musical giant all over it. Delerue possessed a knack of combining woods, strings and at times piano, harp and harmonica to create some of the most beautiful at times plaintive but enduring melodies which seemed to invade the listeners mind and stay there for ever more.” (Movie Music International)