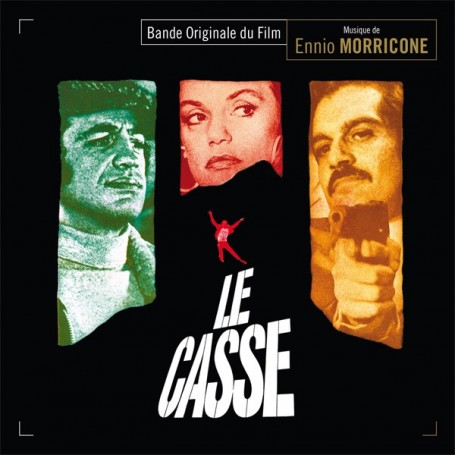 Released in 1971, Le Casse (The Burglars), directed by Henri Verneuil (Guns for San Sebastian, The Sicilian Clan), tells the story of Azad (Belmondo) and his gang who, after having broken into a luxurious villa in Athens, seek to shake off Zacharia (Omar Sharif), a corrupt and sadistic policeman. This film marked the beginnings of a style of cinema calibrated to highlight the acting qualities and physical performance of the star Jean-Paul Belmondo, as well as a certain portrayal of a notion of virility in the popular culture of the era. This type of cinema reached its apogee with Peur sur la ville, directed by the same Henri Verneuil, followed by other successes from celebrity directors of the seventies and eighties, such as Georges Lautner and Jacques Deray.

It is not the overarching virile dominance of Belmondo that Ennio Morricone's score highlights, in fact quite the contrary. In addition to a very few effective dramatic underscore, Morricone’s contribution is to be found in other places, his music serving instead to bring to the fore the character’s faults, failings coming out first and foremost in regard to women, most notably by means of the love theme which reinforces the tenderness, but also all of the ambiguity which unites Azad and the young Hélène (Nicole Calfan). In regard to Lena the striptease artist (played by Dyan Cannon), Morricone provides two pieces of music for the night-club scenes and the Greek restaurant. Since much of the movie's action took place in a hotel where there was background music, Verneuil asked him to write beautifully-crafted pastiche pieces from musical masters of the era (such as Mantovani and Zacharias), with its soothing strings.

For those who missed the previous GDM edition released in 2006, Music Box Records is pleased to reissue the complete soundtrack of Le Casse (The Burglars) composed by Ennio Morricone and conducted by Bruno Nicolai. Supervised and mastered by Claudio Fuiano, this present edition also includes six bonus tracks.