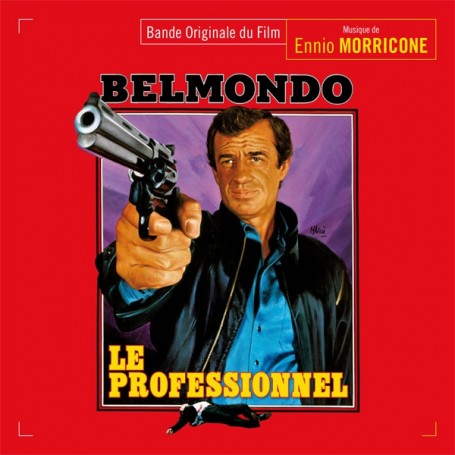 Music Box Records is pleased to reissue the classic Ennio Morricone soundtrack for Le Professionnel, one of the Maestro’s best known scores and themes that attained fame all over the world. Supervised and mastered by Claudio Fuiano, the soundtrack has the same program as the limited edition GDM CD released in 2002 that had been going for unreasonable prices on the secondary market.

For a long time, Le Professionnel has been notable for being one of the best-known Morricone scores even though very little of the composer’s music actually written for the film survived in the final cut. Instead of using the cues Morricone actually penned, director Georges Lautner and more importantly star Jean-Paul Belmondo decided to use a recording of "Chi Mai" a very famous Morricone composition that has been used and recorded in a number of different projects. The first appearance of the famous "Chi Mai" melody was in Maddalena (1971) and was later recorded as a pop song (in several languages) and a so-called disco instrumental was done in 1978. It was this recording that was used in Le Professionnel and is known as the theme from the film (even though it wasn’t specifically written for it).
As per usual, Morricone recorded longer, album only variations of his two primary motives: "Le vent, le cri" and his so called "Bach" motive whose album version was named "Le retour". The first theme represents Beaumont’s character, while the second one was designed as a sort of vengeance motive. The variations made for the film were featured on CDs as well, but due to the random nature of the naming and the random placement of the cues in the film, there’s a whole lot of music you never get to hear within the movie.

For those who missed the previous GDM edition, Music Box Records makes this new remastered definitive edition available once again. The package comes with an 8-page booklet with French and English commentary by Laurent Perret.

"A great little Morricone soundtrack – later than most of the classic work, but done for a French thriller that starred Jean- Paul Belmondo, with some great spare compositions that have slight romantic French soundtrack touches!" (The Jazz Chill Corner)

"It’s just such an incredible piece of music, fascinating compositionally and utterly gripping dramatically. Le Professionnel is an absolutely classic Morricone score which every fan of the composer should have in his or her collection." (James Southall, Movie Wave)