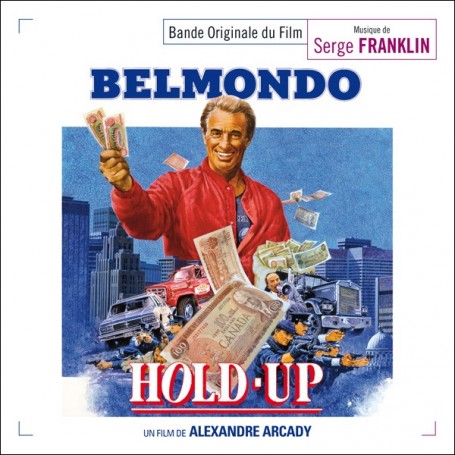 Shot in Montréal, Canada, Hold-Up (1985) is a unique cross between French and American heist films, featuring the great Jean-Paul Belmondo as a clown who breaks into the most secure bank in the city. Also starring an international cast of Kim Cattrall, Guy Marchand, Jean-Pierre Marielle and Tex Konig, Hold-Up was quite successful in America as well and was remade as Quick-Change in 1990. Franklin’s score is an ingenious blend of American/French heist movie traditions with an addictive, funky sound, including the theme song by Rena Scott and the song Running Wild by Jan Loseth.

Dernier Été à Tanger (Last Summer in Tanger, 1987) is a more series affair, starring Valeria Golino (Hot Shots!, Rain Man) as the beautiful Claudia Marchetti who is seeking vengeance for the death of his father. As per usual, the private vendetta interferes with official police business: local detective Corrigan (Thierry Lhermitte) is recruited to find international crime boss William Barrès (Roger Hanin), but the personal angle eventually intervenes the investigation. Returning back to his North African roots, Arcady asked Franklin to compose an Oriental-flavored, erotically charged thriller scores that also features a couple of songs: one by star Valeria Golino and two by Anna Karina who appears as a cabaret singer in the film.

Music Box Records presents both scores in as complete form as possible. The Hold-Up presentation recreates the original LP and since the original album was fairly representative of the score, there was no need for expansion. Last Summer in Tanger had previously been released on LP, but this new release expands the original album with 9 minutes of additional jazzy goodness that wasn’t featured on the record. The limited edition of 500 copies comes with an 8-page booklet with French and English commentary by Gérard Dastugue.

HOLD UP: "The 80s elements of this score shine through and I love that. At the same time, Franklin mix things up with blues, jazz and country." (Jorn Tillnes, Soundtrack Geek)

DERNIER ÉTÉ A TANGER: "The way Franklin mixes ethnic sounds with sexy sax and throwbacks to the classic American big band music and jazz is doing it in a big way for me." (Jorn Tillnes, Soundtrack Geek)

"For this release, Music Box presents the original album of Hold-Up in improved sound and adds another nine minutes of jazz material to Last Summer in Tangiers. The two scores are diverse enough that they may appeal to different listeners, but there’s some engaging thematic writing here that makes the latter in particular a worthwhile find." (Steven A. Kennedy, FSM Online)