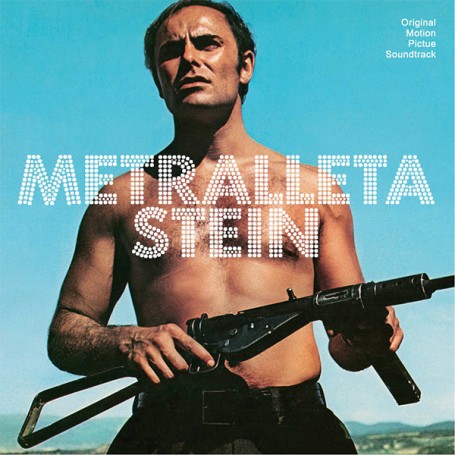 Chris' Soundtrack Corner proudly presents the soundtrack to Metralleta Stein, an adventurous crime thriller written and directed by José Antonio de la Loma, taken for the first time from the first generation tapes (previ ous releases were taken from the LP master). This film was the third movie in a trilogy of crime thrillers involving Police Comisario Emilio Mendoza; the first two had featured the intrepid Comisario investigating urban crime and drug traffickers; Metralleta Stein is a more resolved thriller in which Mendoza, played by Francisco (Paco) Rabal, is a vicious lawman intent on capturing fugitive gangster Mariano Beltrán (John Saxon) at all costs. Character drama is the focus of this escape-and-pursuit thriller as it ranges from the skyscrapers of downtown Barcelona, across the French Pyrénées and into a conclusive confrontation in the tranquil Perpignan countryside.

The film has an interesting choice of musical accompaniment, being comprised of stock music licensed from previous films or music libraries held by Italy's Creazioni Artistiche Musicali (C.A.M.). The seventeen tracks that comprise the Metralleta Stein score were either composed specifically for that music library or used in previous movies, and include cues by five different composers. Stelvio Cipriani is responsible for more of the Metralleta Stein score than any other composer, with eight cues from previous films appearing throughout the movie; Daniele Patucchi has three (one library track and two cues from previous films), as do the jazz/funk duo of Mario Molino and Duilio Radici. Carlo Rustichelli has two tracks and Luis E. Bacalov, one. These seventeen pieces of music make up both the film's underscore and its few source music tracks; two are bonus tracks appearing on CD for the first time.

The variety of music in Metralleta Stein (the film's title refers to the type of machine gun used by the bandit Beltrán) is a curious but arguably quite effective mélange. While some cues by Cipriani and Patucchi provide a more traditionally recurrent type of musical accompaniment in the manner of theme-and-variation, most of the other cues are standalone pieces, but all provide a kind of drive, energy, and tension that benefits the film through their similar foundation in jazz and pop musical idioms. While compiling a score out of bits and pieces of music from previous films or libraries was never a rare practice in filmmaking in Europe or the United States, what is fairly unique about Metralleta Stein is the taking of this cornucopia of music and releasing it as its own compiled movie soundtrack album. From the energetic pizzazz and infectious swing of Patucchi, Bacalov, and Molino/Radici to the heartfelt and affecting harmonic melodies of Cipriani and Rustichelli, this is a score to savor as much for its distinctiveness as for its disparity.

Chris' Soundtrack Corner is pleased to revisit this elusive score in an expanded CD presentation with improved sound quality and more music than previous releases. It is being released concurrently with Stelvio Cipriani's Second Spring, an original score largely replaced by library music from the same composer.

The Metralleta Stein soundtrack album is produced by Christian Riedrich and mastered by Stefan Betke. The CD is accompanied by a 12-page illustrated booklet designed by Aletta Heinsohn featuring detailed, exclusive notes on the film and its score by film music journalist Randall D. Larson, who deconstructs the score's elements in detail.