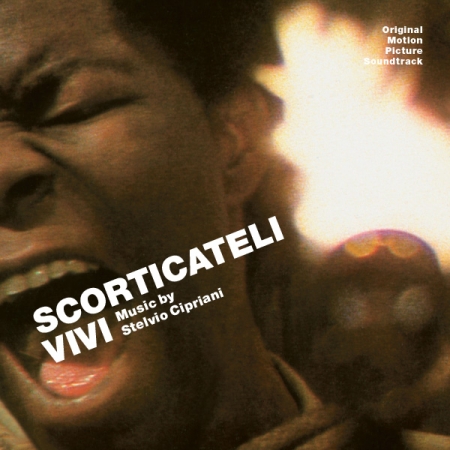 1978’s Scorticateli vivi is a cynical mercenary exploiter that was the last of four films Stelvio Cipriani scored for director Mario Siciliano. The film is best known in the US under the rather grotesquely alluring title Skin ‘Em Alive, even though no one actually gets skinned alive in the movie; it is also known under its 1980 Philippines English language release title, Wild Geese Attack, in an attempt to suggest to theatergoers that it was a direct sequel to the 1978 Andrew V. McLaglen film The Wild Geese. While Scorticateli vivi was indeed inspired by the success of the McLaglen film, it’s in no way narratively connected even though both pictures have to do with mercenaries operating in Africa.

Scorticateli vivi is situated about the midway between the popularity and the waning of what has become known as Euro War films – this subgenre of European movies emerged in the early-1960s and petered out by the end of the ‘80s. Most of them were co-productions shared between two or three European studios, with Italy carrying the lion’s share.

Stelvio Cipriani’s score ranges from vibes, traditional jazz, and bongo-driven percussion runs to rock beats, poignant electric guitar soloing, and driving bass. The music frequently shifts gears and changes palettes as if the composer is trying to keep up with, or make sense out of, the film’s abrupt changes in tone. Several tracks that were written for Scorticateli vivi wound up being excised from the film and replaced with music Cipriani had written for earlier films, adding to the seeming disarray of musical material. But it’s to Cipriani’s credit that the score nevertheless works; there’s a cohesiveness to it created by recurring bass rhythms and riffs and the confluence of harmonic jazz/pop sensibilities that allows the score to do what it needs to do in spite of the unbalanced pace with which the story is advanced. With his upbeat tempos and catchy tunes there’s a commonality of purpose in the music that enables Cipriani to impart to the film a coherent musical soul that effectively drives its breakneck velocity.

While the film may be forgettable (and that’s been the consensus of most critics and online reviewers), Stelvio Cipriani’s score remains quite a treasure. Its variety of musical styles and their engaging interaction as the story plays out is both effective and likeable. Only six of the tracks have been released before and only two of those commercially - the other tracks on this album from Chris’ Soundtrack Corner are all previously unreleased. Many of Cipriani’s score tracks were edited and shortened within the film, which makes presenting them at their full length on this world premiere release of the Scorticateli vivi score on CD especially gratifying.