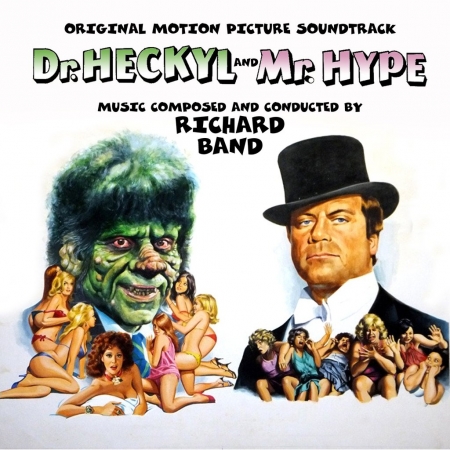 DR. HECKYL AND MR. HYPE began life as a result of a conversation between Charles B. Griffith and Menahem Golan. Griffith was a prolific writer/director for low budget films whose main claim to fame was the quirky LITTLE SHOP OF HORRORS and screenplays for many Roger Corman films including DEATH RACE 2000, EAT MY DUST and THE WILD ANGELS. Griffith’s concept for the film would be that “the ugly guy would be the good guy”.

Released in 1980, DR. HECKYL AND MR. HYPE tells the story of Dr. Heckyl (Reed), an atrociously ugly, malformed podiatrist who falls in love with one of his patients. When his colleague, Dr. Hinkle (Welles) develops an ‘instant diet paste’ that reduces his fat patients to skinny babes, Heckyl steals a vial and drinks it down – and finds himself transformed into Hype (also Reed), a handsome, hedonistic but violently self-absorbed ladies’ man. Soon, the transformations become more frequent and uncontrollable, with Hype reverting back to Heckyl at the most inappropriate of times.

Composer Richard Band was contacted by Charles B. Griffith and asked to score the film. DR. HECKYL AND MR. HYPE would be his third score. His music for the film is a mixture of orchestra and electronics, considered a unique approach in those days as synthesizers were still relatively in their infancy in film music. The score is built around the interaction of three primary themes and two subordinate motifs. The main theme consists of the melody that accompanies both Dr. Heckyl and Mr. Hype as they are characterized through the story. The main theme represents the overall quirkiness of the whole tone of the movie. The score was recorded with a small orchestra of 20 – 22 pieces, small string, brass and woodwind sections, along with two percussionists and augmented by synthesizers.