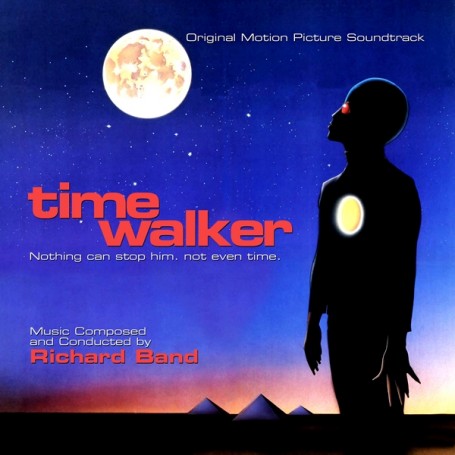 Dragon’s Domain Records presents the world premiere soundtrack release of TIME  WALKER. TIME WALKER features music composed by Richard Band for the 1982 science fiction/horror film directed by Tom Kennedy, written by Tom Friedman and Karen Levitt, from a story by Jason Williams and Tom Friedman, starring Ben Murphy, Nina Axelrod, Kevin Brophy, Robert Random, James Karen, Sam Chew, Jr., Austin Stoker, Darwin Joston, Shari Belafonte, Antoinette Bower, Gary Dubin, Greta Blackburn, Melissa Prophet and Jack Olson as the Time Walker.
Released in 1982, TIME WALKER is an ambitious hybrid of classic monster movies like the MUMMY and marooned alien tales like E.T., sprinkled with tropes of the popular slasher films of the day like HALLOWEEN. The story is set in motion when University professor Douglas McCadden (Murphy) unearths an unusual sarcophagus hidden in King Tutankhamen’s tomb. McCadden returns to his campus in Southern California with the sarcophagus and opens it with the assistance of his archaeology students.  Translating the cartouche on the lid of the sarcophagus, he learns that the occupant is named Ankh Venaris, which, according to his assistant, Susie (Axelrod), means ‘noble traveler’.  McCaden will learn later that Ankh Venkaris is ‘not from around here’. He’s an extraterrestrial traveler who was injured during a crash landing in ancient Egypt during King Tut’s reign. After a first contact that goes horribly wrong, Ankh Venaris was sealed into King Tut’s tomb to keep the populace safe. The plot begins to thicken when technician Peter Sharpe (Brophy) takes high-powered x-rays of the body, which has the unforeseen side effect of reviving the mummified alien while also activating a formerly dormant flesh-eating fungus that coats the mummy’s bandages. Later, Sharpe’s x-rays reveal a cache of spherical crystals hidden in the sarcophagus’ hidden compartment. Sharpe removes the crystals and takes a new x-ray to conceal his theft. Unknown to Sharpe, the crystals are a power source for Ankh Venaris and essential to his plans to return to his home. While Sharpe tries to profit on the crystals either by trying to sell them or using them to charm the co-eds out of their clothing, the mummy goes on a violent shambling rampage as he tries to retrieve them.
Composer Richard Band became involved with TIME WALKER through an acquaintanceship with music supervisor David Franco, who suggested Band to producer Dimitri Villard. For TIME WALKER, Band favors orchestral instruments, enhancing them with a mix of electronic sounds in what would later be recognized as musical sound design.  Most of the music in the film, up until its final climax and resolution, consists of a mix of atonal and fluid musical sound design that mixes new orchestral recordings with synthesized tonalities and textures. But Band does pull the electronics into the background at times to allow for some ferocious action scenes that are symphonically-driven.
Richard Band was born in Los Angeles on December 28, 1953. He is the son of film producer-director-writer Albert Band (THE RED BADGE OF COURAGE – screen adaptation), brother to producer-distributor Charles Band and uncle to young rock star Alex Band of the rock group ‘The Calling’. Shortly after his brother Charles had formed his first movie company, Richard decided to take a break from music and began to work as an assistant director on some of his films. He then went from assistant director to production manager, to associate producer and finally producer on over 13 films. Richard has since gone on to score over 75 feature films and many television productions including multiple episodes of STARGATE SG-1, WALKER: TEXAS RANGER and Disney's SING ME A STORY series.
Richard has composed the music for more than 10 interactive computer/video games over the years and has had many soundtracks that have been released of his film works. Richard has also scored many documentaries including the award-winning series’ MOST DECORATED, BRUTE FORCE and WEAPONS OF WAR and has also contributed much music to other series’ like THE REAL WEST, CIVIL WAR JOURNALS and BIOGRAPHIES. His experience over the years has brought him to record over 22 film scores with internationally renowned orchestras such as THE ROYAL PHILHARMONIC ORCHESTRA, THE LONDON SYMPHONY and THE ROME PHILHARMONIC. He has also had his music recorded in Prague, Romania, Croatia and Munich. In more recent years, Richard has also enjoyed scoring a variety of family and comedy films for Viacom and Paramount Pictures as well as hundreds of animated vignettes for the WB kid's network all of which were scored with orchestra. His musical talents can also be heard on several  amusement park rides including ALIENS - THE RIDE as well as several Vegas venues. Among the many interactive games Richard has scored the music for STAR TREK, WATERWORLD, CASPER, STONEKEEP, DECENT UNDER MOUNTAIN, CLAYFIGHTER and INVICTUS: THE SHADOW OF OLYMPUS.
Dragon’s Domain Records is excited to unearth and present the soundtrack to TIME WALKER for the very first time. TIME WALKER has been produced from the composer’s original elements by James Nelson at Digital Outland, including liner notes written by author Randall Larson.
TIME WALKER is a limited edition release of 1000 units.