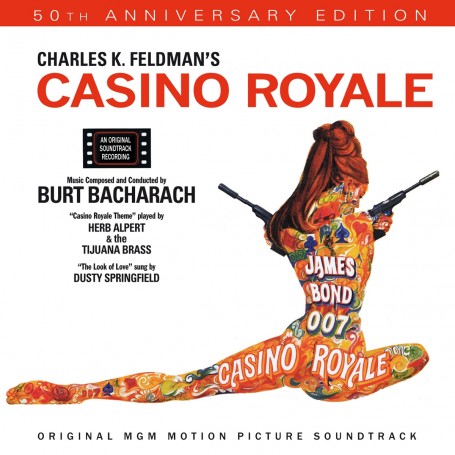 Previously released on CD by several labels, including us (twice, both now out of print), this edition is an important landmark for this legendary score, and we can proudly say that it now sounds better than ever. This new edition has been produced, restored and mastered by wizard engineer Chris Malone, rebuilding the score from the ground up. Malone’s work has focused on addressing unintended technical anomalies (such as filling dropouts and covering analogue splices) rather than broadly applying a modern sound palette. He has eschewed dynamic range compression and retained the brilliance of the original recording. Because the LP program derived from the original film recordings (with some edits made for a more pleasure listening), we have included it on our CD and added all the music composed by Bacharach that was not on the LP to make a 77-minute CD. The bonus tracks are in mono (music stems are still the only available source to date), but Chris has worked them in a very different mood from our previous edition, respecting the mono without adding any stereo reverb and carefully restoring each track in a very warm way. We can say the sound is day and night compared with our previous edition. Live and learn.

To learn more about Chris Malone’s work on this release and read an interview with sound engineer Jack Clegg, who recorded this score 50 years ago at C.T.S. Bayswatster, please follow this link:

This release includes a bonus track making its CD debut: the promo-single version by Mike Redway, and arranged by Bacharach, of the song “Have No Fear, Bond Is Here.” The CD also showcases all-new, exclusive liner notes from film music writer Jeff Bond, and new art design by Nacho B. Govantes in a 20-page full-color booklet.