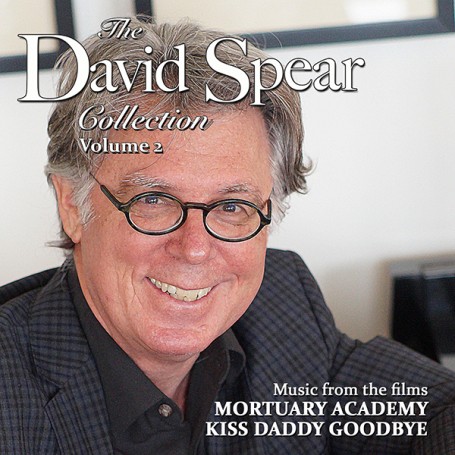 Released in 1981, KISS DADDY GOODBYE, written and directed by Patrick Regan, starring Fabian, Marilyn Burns, Will Rand, Nell Regan, Patrick Regan III, Jon Cedar, Marvin Miller and Chester Grimes, tells the story of two children with psychic powers who use them to avenge the death of their father, who is murdered by a biker gang.

Producers Alain Silver and Patrick Regan were happy with Spears’ work on KISS DADDY GOODBYE and would hire him again for THE CREATURE WASN’T NICE and MORTUARY ACADEMY. Due to budgetary constraints, Silver and Regan requested Spear compose an all-electronic score for the film. Spear used this as an opportunity to explore using the Prophet 10 synthesizer, which was the primary instrument used to produce the music.

Released in 1988, MORTUARY ACADEMY, directed by Michael Schroeder, written by Paul Bartel, starring Richard Kennedy, Christopher Atkins, Perry Lang, Bruce Wagner, James Daughton, Megan Blake, Donna Speir, Paul Bartel, Mary Woronov and Anthony James, is a comedy in the style of POLICE ACADEMY and PORKY’S, and tells the story of the Grimm brothers, who stand to inherit a mortuary if they can get themselves focused enough to pass their mortuary exams. Unfortunately for them, the current owners (Bartel and Woronov) are not in a hurry to leave any time soon and go out of their way to plot to fail the brothers however good they do in mortuary academy.

Spear composed the music for MORTUARY ACADEMY for a small orchestra, which he conducted in Vancouver, British Columbia. Given the subject material, the score is a delightful frolic through a myriad of styles that heighten the comedic foundation for each scene by playing each romp with a degree of sincerity. One of the primary themes was inspired by “Funeral March of a Marionette” by Charles Gounod (track 7, “Paul and Linda”), which was famously used as the main theme for the television show ALFRED HITCHCOCK PRESENTS. Fleshing out Spear’s score are sexy sax-fueled stripper teases, lush romantic strings with harp, quotes of other famous tunes including Brahms’ “Lullaby,” punchlines highlighted with accordion, funky 80s beat-synth cues and an infectious love theme.

Dragon’s Domain Records presents THE DAVID SPEAR COLLECTION, VOLUME 2, featuring music composed by David Spear for MORTUARY ACADEMY and KISS DADDY GOODBYE for the very first time on compact disc. The music has been mastered by James Nelson at Digital Outland and the liner notes have been written by author and composer Brian Satterwhite, with the participation of the composer.