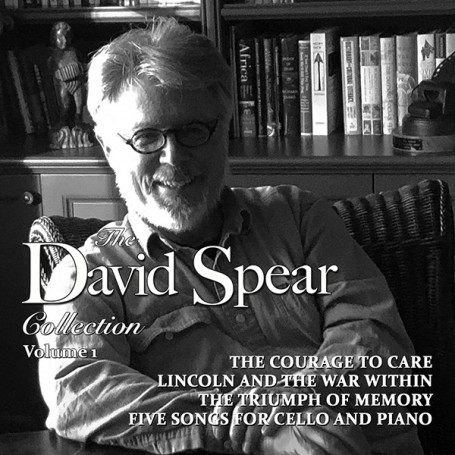 THE COURAGE TO CARE is a 30-minute Holocaust documentary made in 1985; the film was nominated for an Oscar for best documentary short subject. The film was directed and produced Robert H. Gardner, with Richard Kaplan serving as an associate producer in the field shooting the testimonies; it was he who brought Spear into the production as composer, having known him from previous projects. The film, through interviews and location filming, recounts how many Jews were able to survive because they were rescued by non-Jewish people who risked their own lives to put them in their basements or in their closets or hide them from the Gestapo or the Nazis. Spear wrote the score for a quartet (viola, cello, clarinet, and piano), with Spear playing the piano himself.

LINCOLN AND THE WAR WITHIN was a PBS Civil War dramatization focusing on the first few weeks of Lincoln’s presidency, which were crucial for the direction the country would take. Lincoln had to bridge the gap between the North and South while navigating the conflict that he had with William H. Seward, whom he had appointed his Secretary of State despite their longtime rivalry. Spear scored the film to be performed by a nonet—nine musicians, playing flute, oboe, clarinet, guitar, piano, and a string quartet (two violins, a viola, and a cello).

THE TRIUMPH OF MEMORY was a follow-up to THE COURAGE TO CARE, reuniting Spear with director Robert H. Gardner and associate producer Richard Kaplan. Spear used a similar scoring approach but replaced the viola with a violin for his quartet on this project. In addition, he added a bit of percussion into the mix to give the music a sense of tension, like a ticking clock, as the stories are told and difficult memories flow forth. The main approach to scoring the montages between interviews was similar to that of the previous film, but Spear enhanced his palette to accommodate a slightly different tone, and to convey a little more of a folkish Eastern European sound and melody.

The album concludes with a quintet of Spear’s original pieces performed by the composer on the piano accompanied by Eugene Friesen on cello.

Dragon’s Domain Records presents THE DAVID SPEAR COLLECTION, VOLUME 1, featuring music composed by David Spear for THE COURAGE TO CARE, LINCOLN AND THE WAR WITHIN and THE TRIUMPH OF MEMORY for the very first time on compact disc. The music has been mastered by James Nelson at Digital Outland and the liner notes have been written by noted author Randall Larson, with the participation of the composer.

THE DAVID SPEAR COLLECTION, VOLUME 1 is a limited edition release of 500 units.