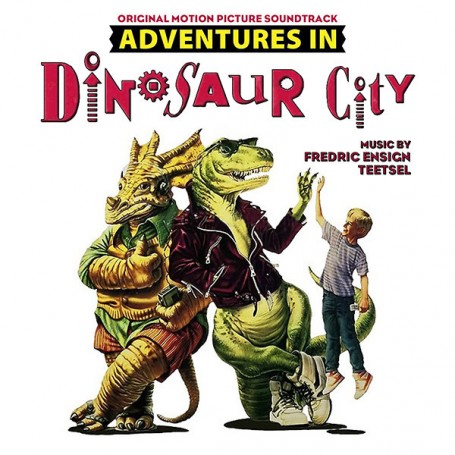 ADVENTURES IN DINOSAUR CITY was a made-for-television motion picture, telling the spiked tale of three teenage “horn-heads” named Timmy (Katz), Jamie (Poston), and Mick (Hoffman) whose favorite TV show is an animated retro-60’s callback called DINOSAURS. This fictitious cartoon series centers on the lives of anthropomorphic dinosaurs inhabiting Tar Town and Saur City. One morning while attempting to watch another episode of DINOSAURS on VHS, Timmy tires of his tiny television set and proffers a “volcanic idea.” He and his companions go into Timmy’s parent’s scientific laboratory adjacent to his house where the “Ultrasaurus of televisions” occupies a massive chunk of the lab floor. Timmy’s parents are both brilliant research scientists who have just achieved a major breakthrough the same morning after they’ve successfully transported an orange through a vortex in the space-time continuum via their television set while “safely” returning the damaged fruit back to its present existence. Timmy inserts the tape into the lab’s high-tech VHS player, hits the play button, and turns on the mammoth television set. The opening title sequence of DINOSAURS appears in all its glory as a laser positioned behind them pierces a hole in the space-time continuum transporting Timmy, Jaimie, and Mick through a vortex to the world of their favorite television show. Upon their arrival in Saur City, the trio encounter their favorite animated characters as live-action creatures: a flightless Dimorphodon named Forry (Sherwood), a Tyrannosaurus named Rex (Labyorteaux), and a Triceratops named Tops (Jolliffe). With the kids’ help, the unlikely alliance journeys to Tar Town igniting a revolution against the evil Mr. Big (Labyorteaux’s voice), and his army of troglodyte henchmen known as The Rockies. ADVENTURES IN DINOSAUR CITY was released on VHS in the United States on October 23, 1991, and relished frequent airings on The Disney Channel throughout the early 1990s. Its modest success might be due in part to the popularity of Jim Henson’s hit television series DINOSAURS (1991-1994) which debuted on the American Broadcasting Company six months prior to the release of DINOSAUR CITY.

The music for ADVENTURES IN DINOSAUR CITY was composed and conducted by Fredric Ensign Teetsel, a jack-of-all-trades musician and movie geek who composed the score for THE HAUNTING OF MORELLA, served as an orchestrator for Mark Governor on MINDWARP and contracted the orchestra who performed Mark McKenzie’s score for WARLOCK: THE ARMAGEDDON. Even though Teetsel originally had visions of Russell Garcia’s THE TIME MACHINE or Nathan Van Cleave’s ROBINSON CRUSOE ON MARS forming the foundation for his musical approach to ADVENTURES IN DINOSAUR CITY, upon the conclusion of the initial spotting session, the producers handed Teetsel some of Danny Elfman’s soundtrack albums and told him this is what they wanted. Unfazed by their intended direction, Teetsel leaped into scoring DINOSAUR CITY with fervor. The film’s limited scoring budget allowed the composer to scribe a healthy chunk of cues for a modest-sized orchestra. The remainder would be tracked using synthesizers. Being a classically-trained pencil-and-paper composer, Teetsel would sketch all of his music on six to eight stave manuscript paper regardless of how the completed cue would be performed.

Fredric Teetsel was born and raised in Phoenix, Arizona, and has been involved with a number of orchestras there. A graduate of the Groves School of Music, Teetsel found work orchestrating and conducting; he was Composer in Residence for the Scottsdale Symphony Orchestra in Arizona from 1983-1986 and 1986-1989 found him an in-house composer producing commercial jingles for local television and radio. He moved back to Los Angeles in 1989 and began visiting movie studios in the hopes of becoming involved in film scoring. One of them was Corman’s Concorde Pictures and THE HAUNTING OF MORELLA would be his first film score. His ongoing relationship with four professional orchestras in Arizona has supplied him with opportunities for commissions for pop orchestra arrangements and original compositions.

Dragon’s Domain Records is excited to bring ADVENTURES IN DINOSAUR CITY to compact disc for the first time, mastered by James Nelson at Digital Outland with liner notes by author and composer Brian Satterwhite, with the participation of the composer.

ADVENTURES IN DINOSAUR CITY is a limited edition release of 500 units.