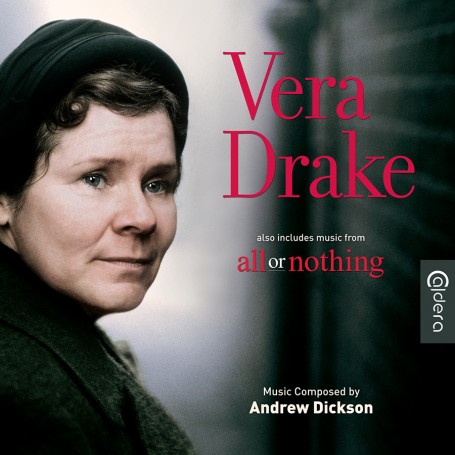 VERA DRAKE / ALL OR NOTHING

Caldera Records is proud to present Andrew Dickson’s music for Mike Leigh’s films “Vera Drake” and “All or Nothing”.
“All or Nothing” tells the story of a family whose members spend their days working at essential and yet low-paid jobs. Penny, played by Lesley Manville, is the main breadwinner as a cashier in a supermarket. Her partner Phil, played by Timothy Spall, drives a cab around town after years of unemployment due to his crippling depression. Living in a council flat with their two children Rachel (Alison Garland) and Rory (a young James Corden), Penny and Phil have resigned themselves to their life on the treadmill. With his music, written for violin, viola, double bass, flute, bass flute and two guitars, Dickson chose to enhance the somewhat desolate nature of some of the characters.
Although “All or Nothing” was well-received critically, it is Mike Leigh’s most underappreciated film as it stands in the shadow of the director’s next work, “Vera Drake”. Vera Drake (Imelda Staunton) is a cleaner in post-war Britain, while her husband Stan (Phil Davis) works in a garage. Although they don’t have much money, they are optimistic. Having survived – and won – the Second World War, things were looking up for the United Kingdom. The worst seemed to be behind it. However, Vera keeps a secret from their family that eventually threatens to destroy their bond. At the Venice Film Festival, “Vera Drake” won the prize for Best Film before it was nominated for eleven BAFTAs, one Golden Globe and three Oscars.
While it is hailed as one of Leigh’s major works, it is also the crowning opus of Andrew Dickson’s film career. By then, he and the director had already worked together for more than 20 years. For the first time in their films, Dickson and Leigh decided to use a choir. For the folk-like main theme of the film, Dickson used the germ of a sinister song about a fairground he had written previously and which had been performed by a 15-year old P.J. Harvey, a Mercury Prize-winning singer with whom Dickson performed in his local band in Bridport.
Also included on this CD are selection from Andrew Dickson’s scores for “Someone Else’s America’ and “Oublie-Moi”. The 39th CD-release of Caldera Records – a world premiere – features a detailed booklet-text by Stephan Eicke and elegant artwork by Luis Miguel Rojas. The CD was mastered by Richard Moore and produced by Stephan Eicke and John Elborg.