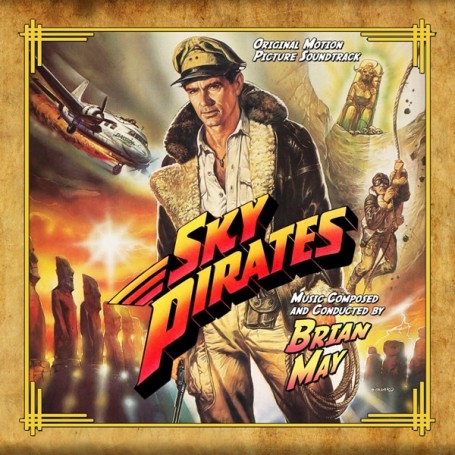 Released in 1986, SKY PIRATES follows the adventures of Air Force Lieutenant Dakota Harris (Hargreaves) as he is called to a secret airbase to begin a discreet mission: fly an American plane to Washington D.C. by way of Bora Bora. On board the plane, a trio of unexpected passengers including Major Savage (Phipps), a former adversary of Harris’, genial Reverend Mitchell (Chilvers), who specializes in archeological mysteries, British General Hackett (Scott) and the plane’s flight crew, and it’s cargo, a mysterious wooden crate that tends to glow when its disturbed. Not to mention, numerous boxes of Kentucky Whiskey. Enroute to their destination, the glowing box seems to attract a supernatural storm which sends the plane far off course, crashing into a kind of Bermuda Triangle known as the Sea Of Lost Ships. Five men escape in a life raft as the plane sinks, taking its mysterious cargo to the bottom of the ocean and thus begins the quest to recover the contents of the crate.

While the spirit of the film was meant to evoke RAIDERS OF THE LOST ARK and ROMANCING THE STONE, audiences largely stayed away from SKY PIRATES. With the quest of the film’s characters launching them throughout the South Pacific, Lamond facilitated filming mostly on location at such exotic locales as Bora Bora, Tahiti, Easter Island, and Australia’s Great Barrier Reef. The film’s period was aided by the use of a number of historical aircraft, including Douglas C-47 Skytrain, North American B-25 Mitchell, CAC Mustangs, and Grumman Mallard. The movie was filmed between May and June 1984 with post-production running through December of that year, although the finished film sat on the shelf for some time before it finally achieved release in 1986. Despite its lavish production design and entertaining storyline, it was a major flop, earning back only a fraction of its production budget. The picture was much more successful in Europe, where it was called DAKOTA HARRIS.

If any element of SPY PIRATES can be found not to be wanting, it’s Brian May’s boisterous and colorful musical score, which gives the movie a thoroughly exuberant dynamic. SKY PIRATES is immersed in bold gestures, large orchestral adventure, and heroic measures that are expressed in energetic and exciting terms. Recorded at Allen Easton Studios in Melbourne with a 62-piece orchestra, May’s SKY PIRATES score is powerful and quite thrilling; based on melody, mystery, and motif, it buttresses the film very well and more often than not subverts the movie’s logistical failures with the diversion of thrilling adventure.

Previously released on compact disc by 1M1 Records in the early days of the compact disc format and very hard to find over the years, Dragon’s Domain Records is excited to bring SKY PIRATES roaring back from the past, newly remastered by Digital Outland. The booklet includes exclusive liner notes written by author Randall Larson.