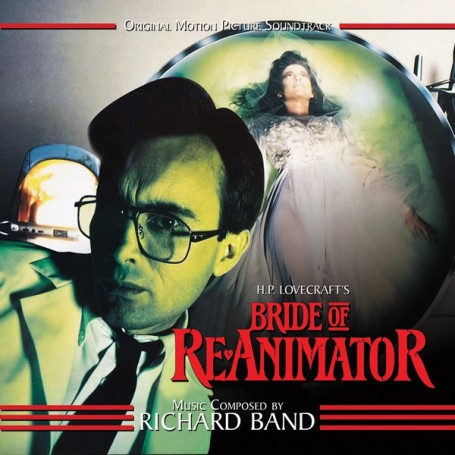 Dragon’s Domain Records presents BRIDE OF RE-ANIMATOR, available through buysoundtrax.com. BRIDE OF RE-ANIMATOR features music composed by Richard Band for the 1990 horror comedy produced and directed by Brian Yuzna, starring Bruce Abbott, Claude Earl Jones, Fabiana Udenio, Kathleen Kinmont, Mel Stewart and David Gale as Doctor Hill (his head, mostly) and, of course, Jeffrey Combs returning as the beloved Dr. Herbert West.
Released in 1990, BRIDE OF RE-ANIMATOR is a sequel to the 1985 horror classic RE-ANIMATOR, which was written and directed by Stuart Gordon and based on the short story ‘Herbert West – Re-Animator’, written by the legendary H.P. Lovecraft in 1922. RE-ANIMATOR’s potent mix of dark humour, buckets of gore and frenetic pacing made it an instant cult classic and fans were eager to see the return of Herbert West. Jeffrey Combs, Bruce Abbott and David Gale reprised their roles in the sequel. After the events of the original film, Doctors Herbert West (Combs) and Dan Cain (Abbott) are hiding out in Peru volunteering their services during a civil war, which allows West to continue his experiments, thanks to the constant influx of wounded soldiers and dead bodies. Dan has begun a new relationship with the fiery Francesca (Udenio). When a firefight erupts in their tent, West and Dan are forced to fold up their tents and return to the only life they know back at the Miskatonic Hospital. Dan begins treating Gloria (Kinmont), a terminal patient with not much time left and he begins to get personally involved with her. Lieutenant Leslie Chapman (Jones) has begun to investigate the events of the first film, known as the Miskatonic Massacre and is getting closer to finding out the truth. Also unknown to West and Dan, one of their associates, Dr. Graves (Stewart) finds the head of their old rival, Dr. Hill (Gale) along with a sample of West’s re-animation serum that Hill had stolen from West. As West and Dan begin to gather body parts for their re-animation experiments, Dr. Graves makes the mistake of trying out the serum on Hill’s head and sets a terrible chain of events in motion…

To maintain consistency between the original film and its sequel, producer/director Brian Yuzna brought composer Richard Band back to write music for the film. His theme from RE-ANIMATOR would serve as BRIDE’s primary driving theme, those bouncy PSYCHO-styled arpeggiated rhythms creating the ferocious forward motion that pushes West relentlessly toward his goal, along with a new love theme, an over-arching and passionate melody which covers a number of associated romantic interrelations in the movie. Where RE-ANIMATOR’s budget allowed for a reasonably sized orchestra, BRIDE barely had a musical budget at all, requiring that Band work with synthesizers and electronic samples imitating orchestral instruments (complemented by a live violin or two) to create the film’s score. Without the organic, acoustic power of a live orchestra on hand, the score creates most of its power synthetically, through Band’s then-state-of-the-art phalanx of synthesizers and samplers. RE-ANIMATOR and BRIDE OF RE-ANIMATOR were Band’s first Lovecraftian film scores, and he went on to score a number of others, including FROM BEYOND (1986) for Gordon and Yuzna, SHATTERBRAIN (1991) for Dan O’Bannon, CASTLE FREAK (1995) for Gordon, and DREAMS IN THE WITCH-HOUSE (2005) for Gordon on TV’s MASTERS OF HORROR.

Richard has composed the music for more than 10 interactive computer/video games over the years and has had many soundtracks that have been released of his film works. Richard has also scored many documentaries including the award-winning series’ MOST DECORATED, BRUTE FORCE and WEAPONS OF WAR and has also contributed much music to other series’ like THE REAL WEST, CIVIL WAR JOURNALS and BIOGRAPHIES. His experience over the years has brought him to record over 22 film scores with internationally renowned orchestras such as THE ROYAL PHILHARMONIC ORCHESTRA, THE LONDON SYMPHONY and THE ROME PHILHARMONIC. He has also had his music recorded in Prague, Romania, Croatia and Munich. In more recent years, Richard has also enjoyed scoring a variety of family and comedy films for Viacom and Paramount Pictures as well as hundreds of animated vignettes for the WB kid's network all of which were scored with orchestra. His musical talents can also be heard on several amusement park rides including ALIENS - THE RIDE as well as several Vegas venues. Among the many interactive games Richard has scored the music for STAR TREK, WATERWORLD, CASPER, STONEKEEP, DECENT UNDER MOUNTAIN, CLAYFIGHTER and INVICTUS: THE SHADOW OF OLYMPUS.
Previously released on compact disc by Silva Screen Records as part of a doubleheader with the original RE-ANIMATOR way back in the early 1990s and long out of print, Dragon’s Domain Records brings the BRIDE OF RE-ANIMATOR back to life again, newly remastered from the composer’s original elements by James Nelson at Digital Outland and with more music, along with liner notes written by author Randall Larson, with the participation of the composer.