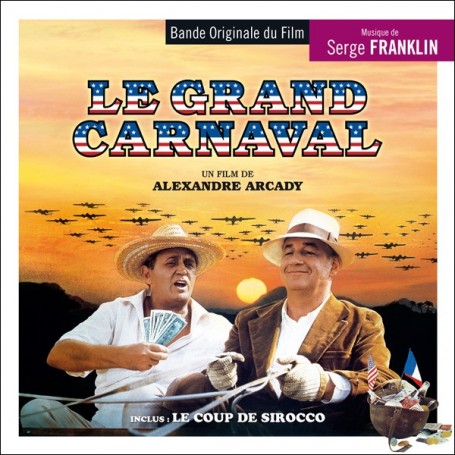 In stock: less than 35 units remaining

More than a story of the cinema, the encounter between Serge Franklin and Alexandre Arcady is first and foremost a story of the theatre. The collaboration between the two men would set in motion work on a number of plays and shorts before launching, in 1979, onto the big screen with Le Coup de Sirocco. Then came Le Grand Pardon in 1982, Le Grand Carnaval in 1983, Hold-Up in 1985 et Dernier été à Tanger (Last Summer in Tangiers) in 1987.
The first of the director’s three full-length features have the feel of a trilogy. Throughout Le Coup de Sirocco and Le Grand Carnaval, we meet the story of the “pieds-noir,” the French of Algeria who inhabit a land bathed in sun, obliged to move to the dark, grey metropolis of mainland France.

Le Coup de Sirocco is the first of a successful trilogy, whose inspiration is a very personal one, about the immigration of the lower-middle class “pied-noir” (black feet, the name given to Algerians of European origin) at the time of repatriation (after the independence of Algeria in 1962). The film stars Roger Hanin, Patrick Bruel, Marthe Villalonga and Michel Auclair.
Franklin and Arcady together evoke the great scores of Nino Rota and Armando Trovajoli: an atmosphere in all ways Mediterranean, voluble and warm, between tarantella and largo, providing thematic material that is simple, immediate and which anchors its roots in the deepest folklore.

Le Grand Carnaval opens rapidly onto a fresco of historic proportions. The action takes place during the Allied landing in North Africa in 1942 and sows deep feeling and discord in the small town of Tadjira. Étienne Labrouche (Philippe Noiret), wealthy landowner and mayor of the town and Léon Castelli (Roger Hanin), a voluble café owner, choose paths that result in a sorry end to their childhood friendship. The first of the two falls in love with a young woman (Fiona Gélin) while the second will become embroiled in the black market with the Italian-American Walter Giammanco (Peter Riegert) setting up an illegal gambling den for G.I.s.
In this boundless and charming tale, composer and director are of one accord on an American-Italian score, played to the sound of records brought over by U.S. Soldiers: swing à la Glenn Miller, flights of fancy sometimes lyrical, sometimes carnivalesque, the intimacy of a guitar or piano solo or that of a violin.

"This is a delightful score, and contains a plethora of magical sounding themes which I am confident will be popular with collectors of fine movie music." (John Mansell, Movie Music Italiano)