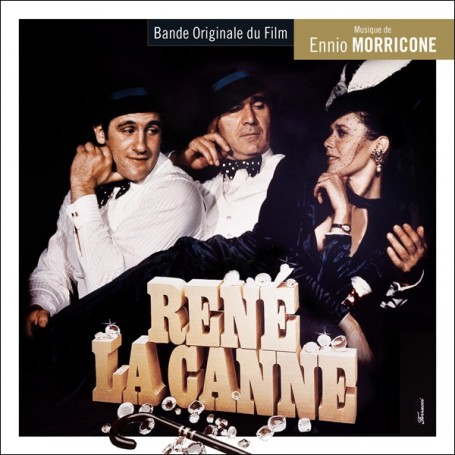 In addition to Spaghetti Westerns and Giallo films, Morricone also made a name for himself in the popular French cinema of the 1970s and 1980s (working alongside Henri Verneuil, Édouard Molinaro, Georges Lautner and Jacques Deray).

René la Canne was the second collaboration between Francis Girod and Ennio Morricone, coming after Le Trio Infernal (1974) and before La Banquière (1980). His film is an adaptation of a story by Roger Borniche about the gangster René Girier and relates the fantastic adventures of a flamboyant mobster (René/Gérard Depardieu) and a maverick police inspector (Fernand la Sournoise/Michel Piccoli), through the 1940s.
What strikes the listener immediately in the main title of René la Canne is its metronome-like rhythm, which recalls in a certain sense that of Investigation of a Citizen Above Suspicion (Elio Petri, 1970). Morricone plays with the incongruity of sounds, taking often the opposite tack to the clichés of “retro” movie music. Synthesizers are not left out of his score, just as certain rhythms come close to Brazilian music. The score is at the same time synthetic and acoustic, grotesque and tragic, straight-backed and bow-legged.

It is in a more classical vein that Morricone would write the other score presented on this album. One, Two, Two: 122, rue de Provence is adapted from the autobiography of Fabienne Jamet. It recounts the story of Paul and Fabienne (Francis Huster and Nicole Calfan), two people from the provinces who move to Paris, the one to launch a career in politics, the other to open a high-class bordello.
The main theme represents the roots of what was to later become that of Cinema Paradiso (Giuseppe Tornatore, 1988), both in terms of the writing, particularly poignant as it is, and orchestration (strings, piano, saxophone). Morricone made the choice of a sophisticated music, but also one that is nostalgic, following the example of the piano/harp dialogue or violin solos that we hear all through the score.

Newly mastered by Claudio Fuiano from the original master tapes, courtesy of Sugar Music and EMI, this new reissue contains the same LP/CD record programs for both films. As the two previous CD releases have been out of print for several years by now, we are very pleased to reissue these two classic film scores from his French period. Throughout the two films, Morricone has brought two different timbres – both however very personalized – to the “retro” cinema of the 1970s.