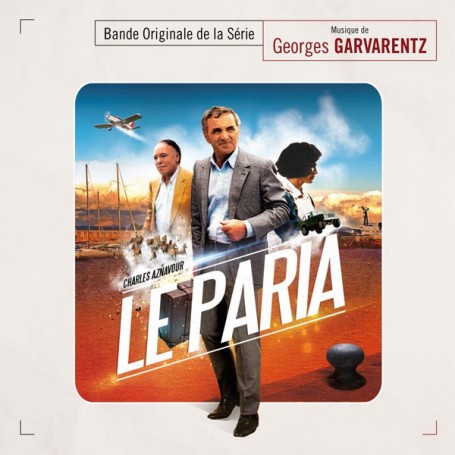 Composer Georges Garvarentz was born in Athens, Greece into a family of Armenian immigrants who travelled to Europe in search of a better life. His father, Kevork Garvarentz was a professor of literature and a poet. In 1942, the Garvarentz family moved to Paris where Georges attended the Conservatoire de Paris to broaden his musical knowledge. In 1965, he met a fellow Armenian émigré named Charles Aznavour, who proved to be his most valuable creative partner: the composer/lyricist duo went on to write over 100 popular songs together. Georges even married Charles’s sister, Aïda Aznavour. In addition to writing hundreds of songs with his partner, Georges Garvarentz also kept himself busy by penning over 150 film scores in a great variety of popular genres from adventure films to spy thrillers and romantic dramas.

Denys de La Patellière (Les Grandes Familles, Marco the Magnificent, Dear Caroline) and writer Albert Kantof wrote the story of Le Paria which stars Charles Aznavour as the leading role and Jean Topart. Julien Mauriès (Aznavour), the younger of a perfumer's family is forced to go into exile after having an unfortunate experience in the estate business. He spent 20 years in Venezuela and made a fortune in the perfume business. After all those years, he decided to come back in France in order to start again and to cleanse his honour.

Georges Garvarentz composed a very powerful symphonic score with a gorgeous, broad sweeping main theme. The score is a lovely homage to the great masters of film music he admired, such as Dimitri Tiomkin, Elmer Bernstein or even Jerry Goldsmith.
The soundtrack was previously released on LP in 1985. For this premiere release of Georges Garvarentz’s Le Paria score on compact disc, this new remastered and expanded edition presents 25 minutes of previously unreleased music. The release is limited to 350 units.