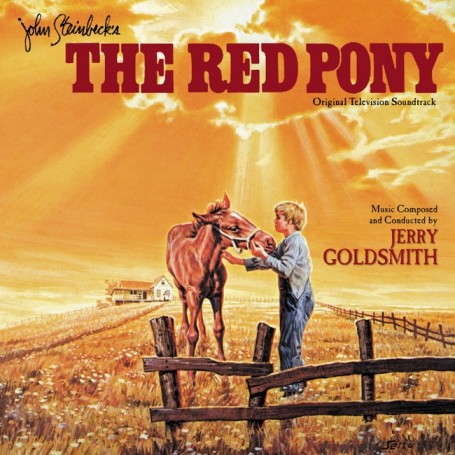 A never-before-released Goldsmith classic! This is the way to celebrate! Jerry Goldsmith won his first Emmy Award for his exquisitely touching and achingly beautiful score for 1973’s The Red Pony.

The Red Pony, which aired on NBC on Sunday, March 18, 1973, was based on John Steinbeck's short stories about a 12-year-old boy growing up on a ranch in California's Salinas Valley during the early years of the 20th century. His stern father gives him a pony, and he learns some hard lessons about life and death in the months to come. The cast included none other than Henry Fonda and Maureen O’Hara, with Clint Howard as the young boy. The production was acclaimed. Fonda was especially pleased with the project (which was nominated for eight Emmy Awards) and said at the time, “Of all [Steinbeck's] works, and I’ve read everything he’s ever done, I think I like The Red Pony best. It’s a classic.”

Without question one of the most important Jerry Goldsmith releases in a very long time, The Red Pony will be a special treat for those who have been waiting for it, but never dared let themselves believe it might actually be released one day. For those unfamiliar with the score – you are in for the very best kind of film music surprise: discovering a new favorite score when you didn’t even know you were looking for it.