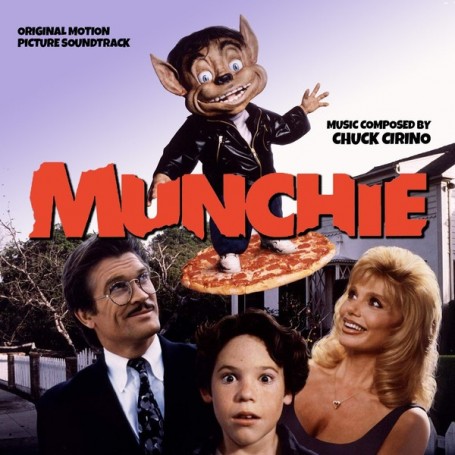 The popular success of Joe Dante’s GREMLINS in 1984 quickly spawned a torrent of contentious pint-size creatures from the minds of moviemakers hoping to feast on box office revenue as satisfying as that of the original GREMLINS. A sequel in name only to MUNCHIES, released earlier in 1987, MUNCHIE was inspired by a 1955 Warner Bros. cartoon short made by Chuck Jones called ONE FROGGY EVENING, about a guy who struggles to make his fortune with a frog that sings and dances, but only when it is alone with the owner. Wynorski and his co-writer of the time, the late R. J. Robertson, developed a script based on that premise, except instead of being a frog, Munchie was a friendly gremlin-like creature that dressed like a lounge singer, sounded like a stand-up comedian and had magic powers. Gabriel Bartalos, a veteran Jack-of-all-trades in the film business, designed and created Munchie’s creature costume, which was made out of foam rubber. It was based on an illustration by co-scripter R. J. Robertson.

Wynorski hired a fine cast, bringing in the beautiful girls who’d been regular stars of his previous R-rated fantasy and horror films, as well as TV stars Loni Anderson, Andrew Stevens, Artie Johnson, and the first appearance of a young Jennifer Love Hewitt, who would appear in several of Wynorski’s subsequent family movies. To play the voice of Munchie, Roger Corman was willing to pay a princely sum for this most important role. Dom DeLuise was suggested, and agreed to take the part.

To write the film’s score, Jim brought in his long-time friend and regular composer, Chuck Cirino. Inspired by a theme Chuck had briefly used in RETURN OF SWAMP THING, Jim asked Chuck to revisit the tune and make it the main thematic foundation of the film. Cirino reworked the piece, added some new elements, and boom—there was the catchy, centerpiece melody for MUNCHIE. Without any musical references with which to model this score after, Cirino essentially had to invent the musical style for the movie. At that time, Cirino’s musical toolbox was equipped with what was then state-of-the-art synthesizers and early musical samplers like the Proteus sampler, Prophet 2000, Roland D50. MUNCHIE possesses a carnivalesque type of score that is effervescent and tuneful, with a variety of colorful and catchy timbres that keep the music fun, with occasional forays into attitude for Munchie himself.

Dragon’s Domain Records is excited to bring MUNCHIE to compact disc for the first time, mastered by James Nelson at Digital Outland with exclusive liner notes by author Randall Larson, with the participation of the composer and the director.

MUNCHIE is a limited edition release of 500 units.