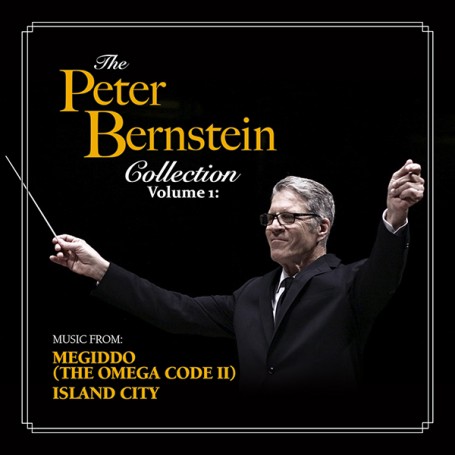 Released in 2001, following the modestly successful Christian faith-based motion picture THE OMEGA CODE from 1999, MEGIDDO: THE OMEGA CODE 2 is a religious science-fiction apocalyptic adventure film directed by Brian Trenchard-Smith starring Michael York, Michael Biehn, R. Lee Ermey, Diana Venora, and Udo Kier. MEGIDDO is a quasi-prequel based on an alternate variation of the original film’s plot, a swath of Christian theology that focuses on the Book of Revelation that closes out the New Testament of the Christian Bible. This book forewarns the second coming of Jesus Christ through the violent destruction of the world known as the Great Tribulation.

The music was composed by Peter Bernstein, son of legendary composer Elmer Bernstein. When director Brian Trenchard-Smith was officially hired to helm the sequel , the filmmaker already had his composer in mind. Bernstein had previously worked with Trenchard-Smith on his two previous made-for-television movies, ATOMIC DOG and HAPPY FACE MURDERS and would eventually work together again on SIGHTINGS: HEARTLAND GHOST. Bernstein composed the entire score in about four weeks and is primarily electronic in nature utilizing sample technology that was cutting-edge for its time.

Broadcast only once on March 2, 1994, ISLAND CITY was a science-fiction backdoor television pilot starring Kevin Conroy, Brenda Strong, Eric McCormack, Peter Koch and Constance Marie. Set in a dystopian future, humanity develops a miraculous new drug that offers its addicts a kind of “fountain of youth.” One of the most severe side-effects of this drug is it mutates its users into disfigured quasi-humanoids with severe violent tendencies. Those few people who have developed an immunity to this side-effect band together to defend the walls of a fortified commune against the mutants outside its gates. During one of their missions into the wasteland, a scout team comes under attack and one of their own is captured by the mutants. The characters cope with the loss by organizing a search-and-rescue mission.

Bernstein was brought aboard the project by the pilot’s producers based on the wealth of action-adventure films he had scored throughout the 1980s. Bernstein composed music for a respectfully large fifty-plus-piece orchestra recorded and then edited by Bernstein on an early hardware Digital Audio Workstation (DAW). This unique level of control over the recorded live elements allowed Bernstein to sweeten the acoustic tracks with additional synthesizers and percussion elements.

Dragon’s Domain Records presents THE PETER BERNSTEIN COLLECTION, VOLUME 1, featuring music composed, conducted and produced by Peter Bernstein for MEGIDDO (THE OMEGA CODE 2) and ISLAND CITY presented for the very first time on compact disc. The music has been mastered by James Nelson at Digital Outland and the liner notes have been written by author and composer Brian Satterwhite, with the participation of the composer.