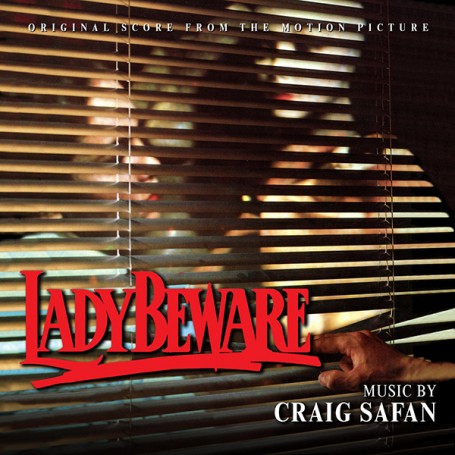 Released in 1987, LADY BEWARE features Diane Lane (A LITTLE ROMANCE, THE OUTSIDERS, STREETS OF FIRE, UNFAITHFUL) as Katya Yarno, a young woman who obtains a job as a window dresser in a chic Pittsburgh department store. Her provocative lingerie displays become known for their sensuous and kinky themes, attracting attention to the store, and giving Katya license for even more tantalizing exhibits. But among those showing interest in Katya’s interactive and alluring posing of the store mannequins is a psychopathic stalker named Jack Price (Woods), whose unyielding pursuit of Katya poses great danger to Katya, forcing her in the end to give Jack a taste of his own medicine.

LADY BEWARE was directed by Karen Arthur, a veteran director of primarily TV movies and series episodes and also a former actress during the late ‘60s and early ‘70s. The film was shot during the summer of 1986 on location in Pittsburgh, Pennsylvania, which added a good deal of verisimilitude to the environment both within the department store and in the downtown cityscape and the many bridges that connect with the various neighborhoods across the rivers.

The 1980s were a busy period for Safan. He scored more than three dozen projects during the decade, ranging from feature films, television series, and made-for-TV movies. During the middle of this period, Safan began exploring scoring movies by combining orchestras with electronics. Safan’s score for LADY BEWARE combines synthesizers and sampled sounds mixed with a large string section to generate a compelling and cohesive score, which builds a good deal of suspense for Katya’s predicament, and then, after a turning point in the story, attends the retaliation she determinedly sets upon Jack. Safan was able to pull together a sizeable string orchestra of about 25 musicians, which equated to a dozen violins, four violas, four cellos, and two basses. Uncredited in the film, veteran scoring mixer Dan Wallin imbued Safan’s musical ensemble with its rich, sonic seasoning. Safan’s music does its job to elevate the tension of the story, enhance the sensitivity of the main character and evoke the inherent danger and apprehension.

Craig Safan has composed music for numerous feature films, television shows, theatrical musicals, and circuses. He is the winner of eight ASCAP Top Show Awards as well as an Emmy nominee. Craig is also a recepient of a Watson Foundation Fellowship and is a member of the Executive Music Committee at the Academy of Motion Picture Arts and Sciences. Currently Craig divides his time between Los Angeles and New York City where he is developing several new musicals.

An early compact disc release for LADY BEWARE appeared in 1987, coinciding with the film’s release, including songs from the film and a small selection of score tracks, Dragon’s Domain Records now presents the world premiere soundtrack release of LADY BEWARE featuring the complete score composed by Craig Safan, and mastered by James Nelson of Digital Outland. The booklet contains liner notes written by noted author Randall D. Larson and includes comments from the composer.

LADY BEWARE is a limited edition release of 500 units.