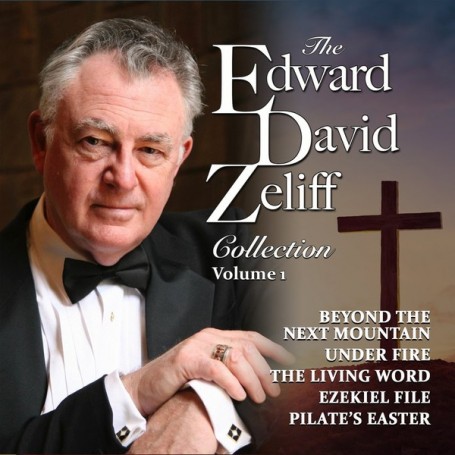 Edward David Zeliff has spent many years in the religious, student, and secular film communities composing and conducting scores for short subjects and features, leading studio orchestras in London and Los Angeles. He is a composer, pianist, arranger, and conductor, having completed his Bachelor of Music in Composition at the California Institute of the Arts, and earning his Masters and Doctor of Musical Arts degrees in Composition from Claremont Graduate University. Dr. Zeliff's catalogue features an extensive collection of choral works that have been performed nationally and internationally by many distinguished ensembles and conductors.

In addition to his vast concert library of choral, piano, solo vocal, instrumental, and orchestral works, Zeliff has composed a handful of film scores, most of them made by and for Christian audiences. THE EDWARD DAVID ZELIFF COLLECTION presents some of these scores for the first time on compact disc.

Released in 1981, BEYOND THE NEXT MOUNTAIN was a feature-length biopic shot on 35mm in remote locations of India, Hawaii, and rural California. The film began its existence with the title UNDER FIRE, for which Zeliff composed, recorded and delivered a completed score. Upon completion, UNDER FIRE sat on the shelf for almost a year until the financiers came to the conclusion it was not reflective of the narrative tone and artistic vision they were ultimately striving for. They replaced the original director, reshot additional footage, and rehired Zeliff to rescore a radically altered cut of the picture. Now called BEYOND THE NEXT MOUNTAIN, the film was quite a departure from its original manifestation, telling the tale of a tribe of hawkish headhunters situated in the eastern mountainous region of India on the border with Burma. Against admonitions from his own government, a British missionary journeys to the area and wielding the Gospel of John, single-handedly converts the tribe to Christianity effectively ending their warmongering ways.

All of the cues Zeliff composed for BEYOND THE NEXT MOUNTAIN were recorded at Abbey Road Studios in London, England by Eric Tomlinson (STAR WARS, 1977; RAIDERS OF THE LOST ARK, 1981). UNDER FIRE was recorded at CTS Studios in Wembley, England by John Richards. Both scores are complete in chronological order based on their appearance in the film.

THE LIVING WORD was a feature length documentary film produced by World Wide Pictures, a film distributor and production company established as a subsidiary of the Billy Graham Evangelistic Association. The producers and director were so impressed with Zeliff’s music for BEYOND THE NEXT MOUNTAIN, they hired him to score their film comprised of exquisitely shot 35mm footage of various Renaissance artworks, landmarks, and locales scattered throughout the Holy Land. A southern preacher narrates various stories related to the Biblical account of each image. Zeliff’s enlightening forty-minute orchestral score, backed by an eight-voice female chorus were recorded together at the same time in the sanctuary of a gorgeous church in Los Angeles, California.

EZEKIEL FILE was a twenty-four minute multi-media presentation put on display at a museum in Israel. Utilizing multiple mediums including projected slides and 16mm film footage, the exhibit included three coordinated projectors—left, center, and right—giving the viewer an immersive aural and visual experience. Zeliff’s music had to be written to sound like one continual piece of music, but was broken up to reflect the various segments of the exhibit.

PILATE’S EASTER was a clever thirty-minute 16mm religious program which the composer refers affectionately as a “church basement” film because it was intended to be shown to religious groups of various Christian denominations as “faith reinforcement” pieces. The presentation of PILATE’S EASTER was told in the style of THIS IS YOUR LIFE. In this spiritual adaptation, PILATE’S EASTER pits Pontius Pilate and his wife Procula against a host who carries them through the trials and tribulations of their lives. Pilate was played by Brian Dennehy early in his acting career. PILATE’S EASTER provided Zeliff with an opportunity to compose a wide variety of different styles of music to support the film.p> Both scores for EZEKIEL FILE and PILATE’S EASTER were recorded by Tony Smyles in the fellowship hall of St. Joan of Arc Catholic Church in Los Angeles, California.

Dragon’s Domain Records presents THE EDWARD DAVID ZELIFF COLLECTION, VOLUME 1, featuring music composed by Edward David Zeliff presented for the very first time on two compact discs. The music has been mastered by James Nelson at Digital Outland and the liner notes have been written by author and composer Brian Satterwhite, with the participation of the composer.