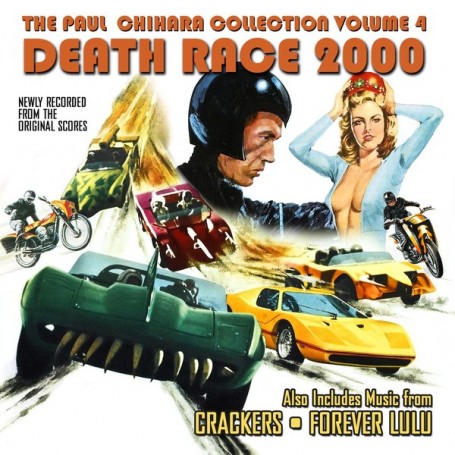 Composer Paul Chihara has had one foot in film scoring (having composed scores for over 90 motion pictures and television series) and the other in concert music for more than 45 years. Among his efforts in Hollywood film scoring are the three films that make up this fourth collection of Chihara’s film music, which are presented here on CD for the first time.

Based on a short story by Ib Melchior, DEATH RACE 2000 takes place in a dystopian American society in the year 2000, where the Transcontinental Road Race has become a form of national entertainment to pacify the masses and keep them from paying attention to the current totalitarian regime that the United States government has become. The government has created the race, where a group of drivers race across the country in their high-powered cars, while the race has become infamous for the violence, gore, and innocent pedestrians being struck and killed for bonus points. A resistance group led by a descendant of the American Revolutionary War hero Thomas Paine plans to rebel against the regime, led by a man known only as Mr. President, by sabotaging the race, killing most of the drivers, and taking Frankenstein hostage as leverage against the President.

At the time the film was being made, Paul Chihara had been working as a Professor of Music at UCLA, where in the 1970s he developed one of the first electronic music studios. At the same time, he became one of Zubin Mehta’s advisors, working with him and the Los Angeles Philharmonic. DEATH RACE 2000 would become his first step on the road to Hollywood. After receiving a phone call from Roger Corman’s secretary asking to speak to him, Chihara presented himself at Corman’s office as one of his own graduate students and convinced the legendary producer that he could create not only the electronic effects for the film but the entire score as well. In the space of three weeks or so, Chihara created a score that was half analog electronic music and half classical string trio with saxophone.

While the original recordings for the DEATH RACE 2000 score have been lost to time, Paul Chihara has recreated the score quite authentically for this CD release. Chihara recreated the sound of the original score by using exactly the same ensemble he had for the original, from the analog synths to the live ensemble.

Released in 1984, and based on Mario Monicelli’s 1960 Italian comedy, BIG DEAL ON MADONNA STREET, CRACKERS stars Donald Sutherland, Jack Warden, Sean Penn, Wallace Shawn and Larry Riley in a story about a group of inept safecrackers in San Francisco. Garvey (Warden) works in a San Francisco pawn shop. His friends Dillard (Penn), Turtle (Shawn), and Weslake (Shawn), team up with Boardwalk (Riley), a local pimp, to break into Garvey's shop while the owner is out of town. Director Louis Malle had originally hired a composer in New York, where he was hoping to do the post-production. But Universal frowned on his selection and insisted Malle use a composer from their stable in Hollywood. Chihara was their newest composer hire, and he was sent to Malle to compose the film’s score. Rather than giving CRACKERS a thematic score, Chihara ended up composing more of an environmental score, creating the mood and the sound of the city through music that could both serve as source music and could also accommodate drama when necessary.

Written and directed by Amos Kollek (SUE, FAST FOOD FAST WOMEN, RESTLESS), FOREVER, LULU (aka CRAZY STREETS on DVD) starred Hanna Schygulla, Debbie Harry, and Alec Baldwin in his first film role, and the film tells the story of a would-be novelist (Schygulla) who gets involved with violent underworld crime elements in New York City and becomes a target, with a few insignificant confrontations with the titular Lulu (Harry) as she wanders aimlessly throughout the city. Like San Francisco in CRACKERS, Chihara builds his score around the New York City environment, with a number of tangos, rags, and dance numbers reflecting both the city and the characters that exist within its milieu.

Dragon’s Domain Records is excited to bring Paul Chihara’s music for DEATH RACE 2000, CRACKERS and FOREVER, LULU to compact disc for the first time on THE PAUL CHIHARA COLLECTION, VOLUME 4, mastered by James Nelson at Digital Outland with exclusive liner notes by author Randall D. Larson, including the participation of the composer. 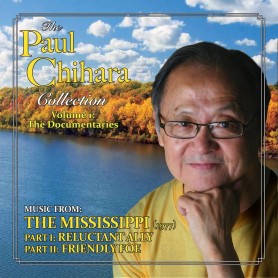 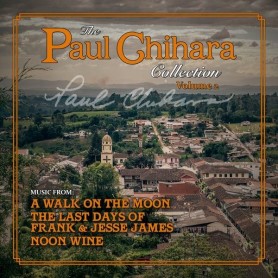 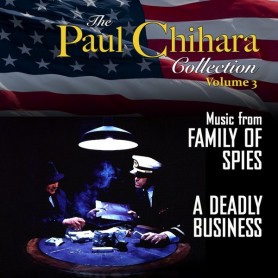