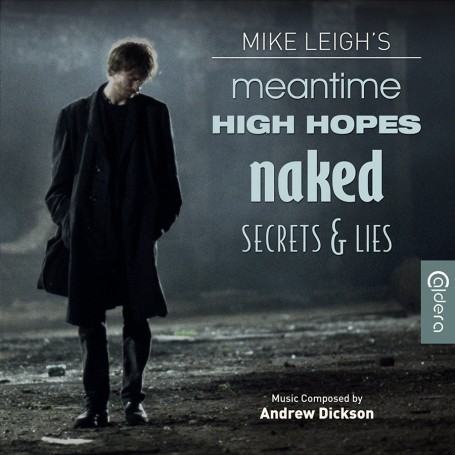 Caldera Records is proud to present a selection of Andrew Dickson’s music for Mike Leigh’s films, most notably “Naked” from 1993.
Mike Leigh is one of the most revered film-makers in British cinema. Over a span of nearly 50 years, he has garnered 7 Oscar nominations, 14 BAFTA nominations (winning four), a Palme d’Or, a Golden Lion, and countless other prestigious awards. He had already shot “Bleak Moments” and several BBC productions when, in 1981, he met Andrew Dickson. Their collaboration would become one of the most fruitful ones between composers and directors: For “Meantime,” broadcast in 1983, Dickson chose to use a tack piano and a saxophone. The composer has always liked the idea of different instruments representing different people, and piano and saxophone somehow seemed perfect for a film about two brothers in a housing project. His music for “High Hopes” with its prominent use of blues harmonica, recorder, viola and bass won Dickson the European Film Award in 1989 – and deservedly so. But, undoubtedly, their most well-known film is “Naked”, a raw and painful portrait of a young man (played by David Thewlis in a career-defining performance) wandering through London’s night life. “Naked” is a relentless score, driven by a recurring ostinato played on harp. The music is as relentless as the character of Johnny, driving him forward, onward, downward. Like “Naked,” “Secrets & Lies” is in an incredibly rich film, giving Dickson a lot to draw on. His music, composed for strings and brass, is heart-rending and yet far from being sentimental.
Andrew Dickson’s music for Mike Leigh’s films has never been released commercially in any format, despite several attempts by various labels. Thanks to the support of both Mike Leigh and Andrew Dickson, we were able to finally license selected cues for this unique compilation, the 34th CD-release of Caldera Records. This world premiere features a detailed booklet-text by Stephan Eicke and elegant artwork by Luis Miguel Rojas. The CD was mastered by Richard Moore and produced by Stephan Eicke and John Elborg.