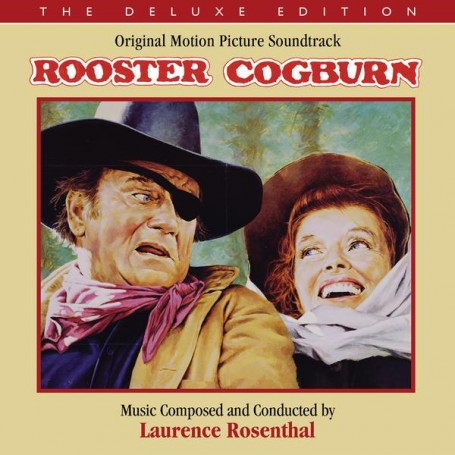 The 1975 film Rooster Cogburn featured the return of John Wayne’s booze-swilling, eye-patch-sporting, rough-and-tumble U.S. Marshal that was first introduced in the 1969 western True Grit. The score was composed by the OSCAR®-nominated composer Laurence Rosenthal, who also scored the 1964 drama, Becket. Much of the ROOSTER COGBURN: The Deluxe Edition score was inspired by either Stephen Foster or Aaron Copland. Look no further than the main title to find a Copland-esque, proud cowboy lullaby that sings over open, orchestral plains or trotting guitar chords as the need arises. This is the first time any music from the film has ever been released.

Rooster Cogburn (John Wayne) has once again been stripped of his badge after some questionable behavior with his gun, but he's given the chance to earn it back after an especially appalling crime demands an experienced lawman. A gang of violent and ruthless criminals, led by Hawk (Richard Jordan) and Breed (Anthony Zerbe), have stolen a shipment of explosive nitroglycerine and cut a swath through a village led by a preacher and his flock. The preacher died, along with many others, and his daughter, Eula Goodnight (Katharine Hepburn), is determined that the outlaws will be brought to justice. Cogburn is given the task of tracking down the criminals, but he's less than enthusiastic about the fact Goodnight insists on tagging along. Rooster Cogburn marked the first (and last) time John Wayne and Katharine Hepburn would work together on screen; it was also the final film from noted producer Hal Wallis.