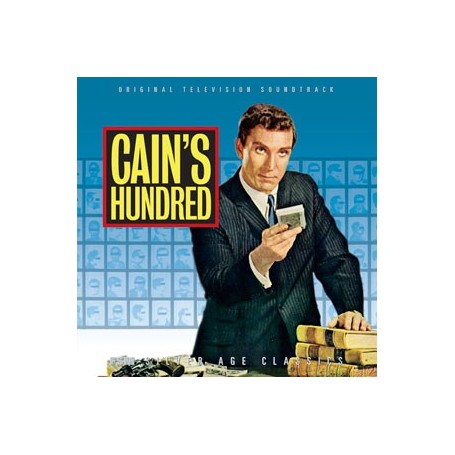 From the early years of Jerry Goldsmith’s sterling career comes a forerunner of his popular “crime” style (as heard on films such as The Detective and L.A. Confidential): Cain’s Hundred, a little-known, above-average 1961–62 television series starring Mark Richman (later known as Peter Mark Richman) as a tough-minded attorney methodically taking down America’s most infamous figures of organized crime.

The series was one of two Goldsmith scored in 1961 for producer Norman Felton (beginning a long-running relationship that would include The Man From U.N.C.L.E.)—the other was Dr. Kildare, and Goldsmith used his given name “Jerrald” on both productions. As was his pattern, Goldsmith wrote the series theme and scores for the first few episodes before departing for other projects; the entirety of his recordings (save one cue deteriorated beyond use) is presented here in clean monaural sound from the original scoring masters.

Cain’s Hundred features a grim and moody sound befitting the darkness of the criminal underworld—with flashes of light for the innocent characters trapped therein. Goldsmith blended blues and militaristic influences in what Hugo Friedhofer called “federal music” for the driving series theme. As with almost all of the composer’s television work, the underscores bristle with the invention, exciting modernist effects and emphasis on melody that would make him one of the greatest film composers of all time—and especially groundbreaking in the 1960s.

FSM’s premiere CD of the Cain’s Hundred television soundtrack features Goldsmith’s four episode scores and title music—including a different arrangement of the theme created for the pilot (which was aired midway in the series’ run). Filling out the disc is a Morton Stevens score for a subsequent episode in which Stevens re-recorded and slightly adapted Goldsmith’s title music. Liner notes are by television music authority Jon Burlingame.

Markdown on a Man