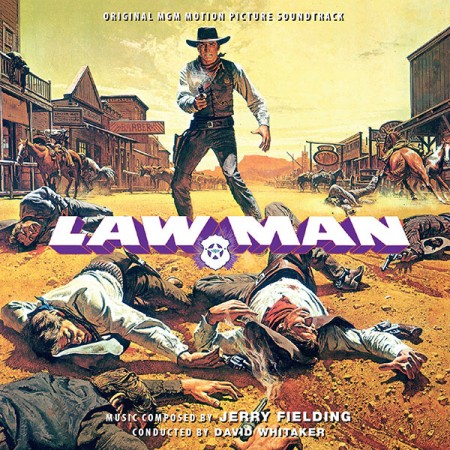 Jerry Fielding’s striking western score gets newly edited & remastered CD! British director Michael Winner comes to the U.S. to tell a uniquely American tale of the old west via an uncompromising, “take no prisoners” approach that turned heroism upside down. The titular marshal quite simply enters the town of Sabbath with warrants to arrest seven men who had in drunken rowdiness killed an innocent citizen during a cattle drive. One by one, the seven men are tracked down, cornered and executed in the name of the law. The finale remains one of the most savage of all westerns. Burt Lancaster stars, with solid support from Robert Ryan, Lee J. Cobb, Robert Duvall, Sheree North, Albert Salmi. Gerald Wilson pens the cynical script, United Artists releases in 1971, Jerry Fielding provides the brief but essential score. Fielding matches Winner in uncompromising fashion by writing music that is decidedly non-western in terms of convention yet evokes the outdoor space, dry arid landscape and violent gunplay of the time and locale just the same. His harmonic vernacular is tight, terse. His melodies have shape but aim for tension and brutality. Like the film, there are no heroes with white hats on horseback. Lancaster’s dark clothes and black hat blur the lines between right and wrong and Fielding traverses that slippery slope by launching in his lengthy “Titles” with a bittersweet minor-key theme in violins over rhythms in the orchestra that suggest not the gallop or pace of the horse Marshal Maddox rides but the unrelenting drive and purpose he exhibits instead. There are numerous highlights in the score but demanding a spotlight is Fielding’s “Finale”, which emerges from the carnage first on French horns but soon surges through the full orchestra. In just over a minute, Fielding takes it from this stark opening to an incredible fortissimo, made all the more stunning by its use of trumpets in their highest register, well above the rest of the orchestra! No shining major key harmony here, the closing bars are slashing and definitive. A powerhouse finish! Intrada premiered this short albeit complete score years back in an edition edited not in film sequence but one which grouped the numerous short cues into longer pieces and mini-suites. For this new presentation, Intrada has worked from recently located, unedited 2-track stereo masters, courtesy MGM, allowing a new listen in less brittle sound with the cues heard using Fielding’s original film sequencing for an entirely different experience. Nick Redman’s original 2004 notes have been retained out of respect for the gifted film historian. Kay Marshall designs the colorful booklet. Recorded and mixed by Richard Lewzey at CTS Studios, London. Orchestrations by Greig McRitchie. Jerry Fielding composes, David Whitaker conducts. Intrada Special Collection CD available while quantities and interest remain! 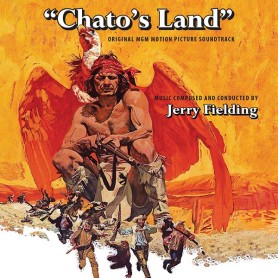