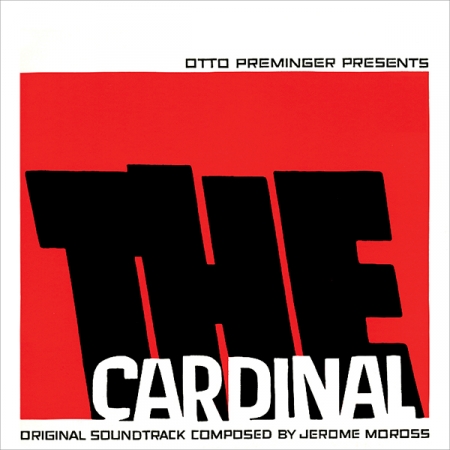 Otto Preminger has always had a keen ear for music, and his choice of composers has always been interesting and spot on, not to mention eclectic, and included scores from David Raksin (Laura and several other Preminger films), Elmer Bernstein (The Man With the Golden Arm), Mischa Spoliansky (Saint Joan), Georges Auric (Bonjour Tristesse), Duke Ellington (Anatomy of a Murder), Ernest Gold (Exodus), Jerry Fielding (Advise and Consent), Jerry Goldsmith (In Harm’s Way), and, on The Cardinal, the great Jerome Moross.

Jerome Moross had already created one of the greatest western film scores ever written, The Big Country.  He’d also written scores for Seven Wonders of the World, The Proud Rebel, The Jayhawkers, The Adventures of Huckleberry Finn, and Five Finger Exercise, among others.  For The Cardinal, he came up with a stunningly gorgeous main theme, and the other scoring is just perfection, music on a vast canvas, filled with many majestic and emotional moments.  The theme was so beautiful, in fact, that the great lyricist Carolyn Leigh (Broadway’s Wildcat and Little Me and the songs “Witchcraft” and “The Best Is Yet to Come,” all written with Cy Coleman) put words to music, titling the song “Stay with Me.”  It was recorded by Frank Sinatra in 1963 and more recently by none other than Bob Dylan on his 2015 Shadows of the Night album.

For this release, the original two-track album masters were used, as well as the three-track masters for several tracks, including a bonus track not included on the original LP, a more pop-sounding version of the title theme.  The tapes were in great condition and Moross’s amazing score sparkles and gleams as never before, rendering any previous releases superfluous.