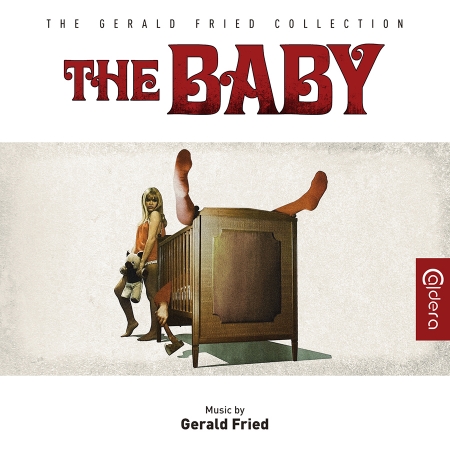 Caldera Records is proud to present the score for the motion picture “The Baby” from 1973, directed by Ted Post, featuring music by Gerald Fried.
The motion picture, marketed as a horror film, tells the story of a dedicated social worker takes on a case involving a grown-up man still in diapers. It doesn’t take long for the disturbed social worker to figure out that ‘Baby’s’ family deliberately keeps the retarded man-child from maturing. There are even more disturbing facts to note: the disappearance of previous social worker being the most unsettling. But lo and behold, the new social worker finds herself confronted with the ‘Baby’s’ family who, so it seems, is out to silence her.
Gerald Fried's music provides a phonic reminder that things may not be as presented; a harmonic harbinger of hidden dread. Fried's resonantly descriptive dissertation is centered around a somber and melancholy etude, offered first in cello solo (performed by the esteemed Edgar Lustgarten), and expanded into a dreamlike lullaby, which sustains the film's emotional capital throughout. This forlorn, needful melody acts as a guiding constant with the netherworld atmosphere created by Gerald Fried's eerily sublime orchestration – a creepy and unsettling realm of threatening rattles, hypnotic chimes, and nightmarish music box tinkling.
The 29th CD-release of Caldera Records features a detailed booklet-text by David Fuller and Stephan Eicke and elegant artwork by Luis Miguel Rojas as well as an exclusive audio commentary by Gerald Fried. The CD was produced by Stephan Eicke and John Elborg.