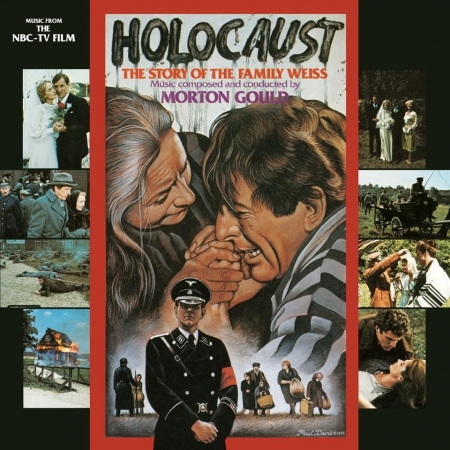 HOLOCAUST: THE STORY OF THE FAMILY WEISS

Now available on CD, for the first time ever, is Morton Gould's tragic and beautiful score to the NBC movie, Holocaust. Featuring liner notes by acclaimed author Jon Burlingame, this is a straight reissue of the 1978 RCA LP release. Sony provided us excellent sources to work from and we are sure you will agree that Holocaust sounds magnificent. This is one of those big orchestral scores that every collector should own. We have decided to release this at 1,500 copies but will consider pressing more if demand is there.

Capping a life full of achievements in all facets of music are Morton Gould's 1995 Pulitzer Prize for Stringmusic, commissioned by the National Symphony for the final season of music director Mstislav Rostropovich, and his 1994 Kennedy Center Honor in recognition of lifetime contributions to American culture.

Born in Richmond Hill, New York, on 10 December 1913, Gould was recognized early on as a child prodigy with the ability to improvise and compose. At the age of six he had his first composition published. He studied at the Institute of Musical Art (now the Juilliard School), but his most important teachers were Abby Whiteside (piano) and Vincent Jones (composition).

In addition to his Pulitzer Prize and Kennedy Center Honor, he was Musical America's 1994 Composer-of-the-Year. A long-time member of the American Society of Composers, Authors, and Publishers, Gould was elected president of ASCAP in 1986, a post he held until 1994. In 1986 he was elected to the American Academy and Institute of Arts and Letters. He also served on the board of the American Symphony Orchestra League and on the National Endowment for the Arts music panel.