Dragon’s Domain Records presents the soundtrack release of THE BRIAN MAY FANTASY FILM MUSIC COLLECTION, a 2 CD collection featuring music composed by Brian May (MAD MAX, THE ROAD WARRIOR, CLOAK & DAGGER) for a select group of Australian horror/fantasy films produced by Antony I. Ginnane during the boom of the Australian New Wave of cinema in the late 1970s and early 1980s. THE BRIAN MAY FANTASY FILM MUSIC COLLECTION includes music from PATRICK (1978), SNAPSHOT (1979), HARLEQUIN (1980) and THE SURVIVOR (1981).

PATRICK tells the story of Kathy (Susan Penhaligon) a young nurse who begins working at a small private hospital where she encounters Patrick (Robert Thompson), a comatose hospital patient who appears to have the ability to use his mind to influence the world around him. After killing his mother and her lover by electrocution, Patrick hasn’t left his bed in three years. Dr. Roget (Robert Helpmann) is in charge of Patrick’s treatment and has been secretly using him for his own personal experiment. As the story progresses, Patrick becomes more attached to Kathy and strange things start to happen around her. Directed by Richard Franklin and written by Everett De Roche, frequent collaborators who worked together on many films, including ROAD GAMES, PSYCHO II and LINK.

SNAPSHOT, also known as ONE MORE MINUTE and DAY AFTER HALLOWEEN, tells the story of Angela (Sigrid Thornton), a young hairdresser who finds herself on her own for the first time after a difference of opinion with her mother about the way she’s living her life. One of Angela’s clients, Madeline (Chantal Contouri), thinks that she might make a good model and introduces  her to Linsey (Hugh Keays-Byrne), a well regarded photographer. He convinces her to pose topless for him for a possible advertising campaign.  Angela moves in with Linsey and starts spending time with other models while she waits for new modeling opportunities. Meanwhile, a mysterious figure driving an ice cream truck begins to stalk her…  Equal parts drama, thriller and horror film, SNAPSHOT was directed by Simon Wincer (THE LIGHTHORSEMEN, LONESOME DOVE) and written by Everett De Roche and Chris De Roche.
HARLEQUIN, also known as DARK FORCES, tells the story of Nick Rast (David Hemmings) and his family. The film begins with the disappearance of the Australian deputy governor. Rast is next in line to replace him. His son, Alex (Mark Spain) is suffering from leukemia and is no longer responding to treatment.  One night, the family is visited by Gregory Wolfe (Robert Powell) a charismatic faith healer who claims he can cure Alex.  Even after only spending a few minutes with Wolfe, it is apparent that he is having a positive effect on Alex’s health. As the film progresses, Wolfe manages to integrate himself into every aspect of Rast’s life, which does not go unnoticed by Rast’s political friends. HARLEQUIN was directed by Simon Wincer and written by Everett De Roche.

Directed by David Hemmings, based on the novel by James Herbert and a screenplay by David Ambrose, THE SURVIVOR follows the aftermath of a terrible plane crash that claims the lives of all the passengers and crew except for one of the pilots. The film follows Keller (Robert Powell) as he tries to recall the events that led up to the crash and how he came to be the only one to survive.  Keller meets Hobbs (Jenny Agutter), a local psychic who has been having visions since the night of the crash. She convinces Keller that the only way he will be able to find peace is to solve the mystery of the fatal crash. At the same time, the spirits of some of the children killed in the crash begin to appear to the local townsfolk, followed by a series of strange deaths…

One thing these films have in common is the music of Brian May. All of Antony I. Ginnane’s horror/supernatural thrillers from this time period were scored by Brian May. For PATRICK, May composed a lush-sounding symphonic score supported by ARP synthesizer. His score for SNAPSHOT mixes dramatic orchestral music, with sublime romantic music and a fair amount of contemporary modern jazz. HARLEQUIN was scored for a variety of atonal motifs for strings, piano, and percussion, giving thematic unity through a lush, string-based love theme. THE SURVIVOR is arguably May’s most Herrmannesque score, opening with a main theme that recalls Herrmann’s Hitchcock collaborations.

Born in Adelaide in 1934, Brian May (no relation to Brian Harold May of Queen) was one of the first composers to achieve international acclaim as an Australian composer and was best known as the composer of MAD MAX and THE ROAD WARRIOR (MAD MAX II). May received his musical training as a pianist, violinist and conductor at the Adelaide Elder Conservatorium. He joined the Australia Broadcasting Company in 1957, where he formed the ABC Adelaide Big Band, an ensemble that performed all manner of light music for broadcast, and May became a leading figure in Australian light music as a result.  He moved to Melbourne in 1970 to arrange and conduct the ABC’s Melbourne Show band. Moving into film music in a period of time when Australia’s film industry was just beginning to take its place among international film circles, May composed such notable film scores as RACE FOR THE YANKEE ZEPHYR, ROAD GAMES, CLOAK AND DAGGER, DEATH BEFORE DISHONOR, MISSING IN ACTION 2, SKY PIRATES, STEEL DAWN, DR. GIGGLES, FREDDY’S DEAD: THE FINAL NIGHT MARE and BLINDSIDE. He won the Australian Film Institute Award for best original score with MAD MAX; many other awards followed, including the Golden Award from the Australian Performing Rights Association. He continued to score films until 1993, composing music for more than 30 films and many hours of television, most of which he orchestrated himself. Sadly, the composer passed away in 1997 at the age of 63.

Previously released on compact disc by 1M1 Records in the early days of the compact disc format, Dragon’s Domain Records is excited to bring the contents of THE BRIAN MAY FANTASY FILM MUSIC COLLECTION back from the past, newly remastered by Digital Outland and presented together on two CDs.  On this release, PATRICK is presented via a short seven-minute suite that encompasses the main elements of May’s score.  Because the previous presentations of  SNAPSHOT were markedly different, we have opted on bookending this collection with both versions of the SNAPSHOT soundtrack. Disc 1 presents the 1M1 release, which follows the film sequence.  Disc 2 consists of the version assembled for Citadel Records. This version was edited and sequenced differently, but because we like this presentation very much, we wanted to include it as an alternate assembly for your listening pleasure. Our presentation of the HARLEQUIN score replicates that of the 1980 French MovieMusic vinyl release and the 1M1 CD. THE SURVIVOR appears as it did on the previous 1M1 release. The booklet includes exclusive liner notes written by author Randall Larson, with the participation of producer Antony I. Ginnane. 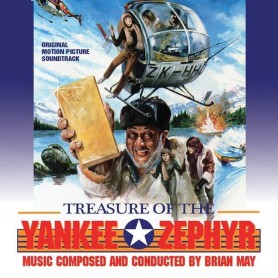