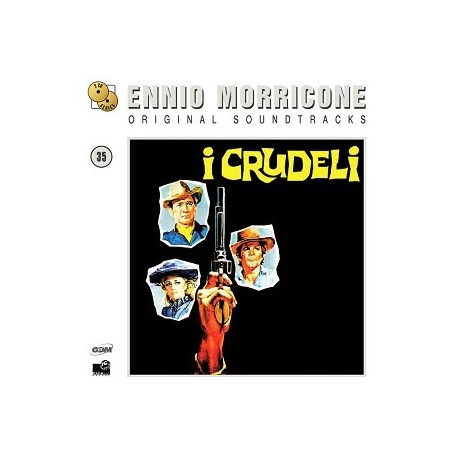 I CRUDELI (The hellbenders) 1967
Aka THE HELLBENDERS (1967) is a western directed by Sergio Corbucci. Starring in the leading roles Joseph Cotton, Norma Bengell and Al Mulock. The story: The civil war is over but the southern army’ captain Jonas (Cotton) does not want to accept the defeat. Together with his sons and a certain Kitty, during an ambush they exterminate a northern squadron and take possession of a great spoil , hiding it in a coffin.While traveling by stagecoach , the troops that stop them Colonel states that in the coffin there are the remains of General Allen and Kitty is his widow. After various adven- tures, and after the coffin is exchanged for another containing the remains of a bandit was killed , the entire family of Colonel is exterminated. A bad role for Cotton in a me- diocre western. For director Corbucci It was after NAVAJO JOE (1966) is the second collaboration with Morricone. At the end they had worked together on seven films, all westerns. The music as usual works very great in the film and also on cd. What else could we expect from a composer who is famous for his western scores? In the film the maestro uses the pseudonym of Leo Nichols. The trumpet frequently present in the score is played by Nunzio Rotondo. The use of the voices of I Cantori Moderni di Alessandroni gives the score an extra dimension. In track 3 “Un monument” we hear the uncredited voice of Edda dell’Orso. The western style is sometimes a bit jazzy as in track 4 “Minacciosamente lontano”. There is a lot of solo percussion underlined with the trumpet and piano as the key instruments in the score. The music is sometimes a bit atonal and experimental, after all, it was his early period. Even without violins or cello’s in this score, the style of Morricone is recognizable right from the first notes and imitated by many other composers who wrote western scores. Nobody yet could equal the qualities of Ennio Morrione. His typical style of composition and orches- tration made him a classic. It took eleven years for the first track to appear on LP in 1978. In the year 2000 the first cd was released with the complete score on it. Now the remastered score in a limited edition.

REVOLVER (The good thief) 1973
A thriller directed by Sergio Sollima in 1973. Starring Oliver Reed, Fabio Testi and Agostina Belli in the leading roles. Anna, wife of Vito, deputy director of the peniten- tiary in Milan , is kidnapped by a gang of mobsters who ask for her release a detainee minor is freed . Vito helps the prisoner to escape , and with him goes in search of his wife . But then he realizes that at the base there are a lot more complex intrigues , with big political and economic interests.A sophisticated build-up film that starts as thrill- er in the style of a Dirty Harry movie, is increasingly subversive and makes the police- man a despicable bastard. Director Sergio Sollima worked together with composer Ennio Morricone in this movie for the 5th and last time. The soundtrack begins with a song in French with the Italian title: “Un Amico” by Bevilacqua – Desage – Morricone, sung by Daniel Beretta using a falsetto voice. The track has an orchestral version in track 6, another vocal by Daniel Beretta in a lower key with the accompaniment of a twelve string guitar in track 11, a version for trumpet in track 18 and finally a version for synthesizer in track 21. The track “Revolver” is a particularly inspired composition and with a unique rhythm. Of course back in different orchestrations . There are also references to popular themes , as in the song “ Anna “ in the tracks 3 and 13 or “ Quasi un Vivaldi “ in the tracks 4 and 14 , but the music is strictly original , with modern pop arrangements.The use of electronics together with the orchestra gives some of the music a tension that works admirably in the film and on cd.