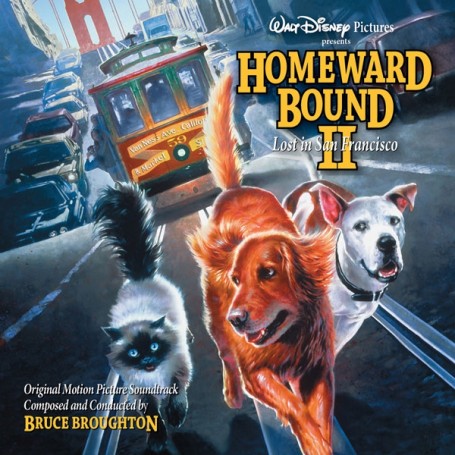 Bruce Broughton's warm, exciting score for Homeward Bound II gets the royal treatment on CD! Following the considerable success of his soundtrack for the first movie (also available on Intrada), Broughton took his primary themes, gave them fresh new trappings and added an abundance of all-new material to envelope everything in rousing new musical garb. Walt Disney Pictures produced a major audience crowd-pleaser with Homeward Bound: The Incredible Journey in 1993. In 1996, they brought the cast back to further their adventures, this time in San Francisco. Back as well, of course, were Shadow, Chance and Sassy, two incredible dogs and one extraordinary cat that began their famous journey as real-life pets in Sheila Burnford's 1961 novel, shortly thereafter in Disney's live action 1963 film. Broughton fashioned one of his all-time most endearing themes with his broad Americana melody associated with elderly Shadow and the journeys inherent in both films. Themes for Sassy the Siamese cat, Chance the younger Labrador retriever also have their say. This time around, Broughton also brings considerable new action music into focus, underlining the profuse adventures (and mis-adventures!) the animals happen upon throughout the city, especially with a pack of other stray dogs. In addition, Broughton now composes an all-new "puppy love" theme for Chance and his new friend, Delilah. New highlights include the rousing airport escape music, the warm, seductive material for Chance and Delilah and a lengthy van attack sequence. Disney's label released an album in 1996, featuring roughly half of the score. Now, courtesy that label and the entire Disney Music Group, Intrada was given access to the complete 2" 24-track scoring session masters made by Armin Steiner at the Paramount Pictures scoring stage in February 1996. Hear now an incredibly vibrant new presentation of Broughton's expanded soundtrack with twice as much music! Previously unreleased material abounds! Of notable interest are two distinct "End Credits" pieces: each are rousing medleys of the familiar themes mingling with Broughton's new love theme, but one offers the tune seductively on soprano sax, the other plays it sweetly serious, courtesy gentle oboe over strings. The former version made it into the picture, it and the latter version are both featured on this CD! Bruce Broughton conducts. Intrada Special Collection CD available while quantities and interest remain!

*Not Featured in Film