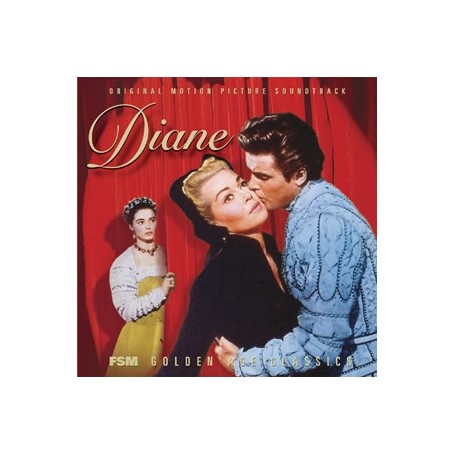 Diane de Poitiers (1499-1566) was the sophisticated mistress of King Henri II of France, who virtually supplanted the Queen for a period of the French Renaissance. In 1956 M-G-M mounted a lavish feature film of her pivotal years, scripted by the formidable author, Christopher Isherwood. Diane was played by Lana Turner, with a young Roger Moore cast as Henri, and colorful faces in the roles of the French and Italian royalty who turn the plot.

Key to M-G-M's grand, historical style was composer Miklós Rózsa, who scored so many costume dramas for the studio: Ivanhoe, Knights of the Round Table (FSMCD Vol. 6, No. 7), Young Bess, and Moonfleet (FSMCD Vol. 6, No. 20), among many others. Diane features manly activities calling for robust, symphonic scoring in the style of Rózsa's adventure music, but it is essentially Diane's tale of the heart: a woman who resists true love for the good of her kingdom. Rózsa responded with a gorgeous melody representing her grace, nobility and romantic yearning; the theme was in fact called "Beauty and Grace" in a popular arrangement.

As was customary for the composer, Rózsa provided Diane with a host of secondary themes, from regal fanfares for the King; to an austere theme for Diane's unloving husband; to darting, menacing motives for the treacherous Italians; to shimmering, choral mysticism for the story's "prophecy" component. He provided French dances for the film's source music, although the score itself concerns the timeless human drama, and is vividly carried by Rózsa symphonic style. It is the kind of score that made fans want to listen to the music—which only took 48 years to happen!

Although not a long score per se, Rózsa recorded so many alternate versions for Diane that it is being released as a 2CD set. Disc one features the score proper, while disc two features alternate cues as well as source music and skeletal "pre-records." Filling out disc two are additional and alternate cues from two other Rózsa historical works: Moonfleet (1955, FSMCD Vol. 6, No. 20) and Plymouth Adventure (1952, FSMCD Vol. 6, No. 1), which would not fit on their earlier FSM editions. This 2CD album thus "closes the book" not only on Diane, but on Moonfleet and Plymouth Adventure.

The release is by and large in stereo, save for certain source tracks, as well as the Plymouth Adventure material, which was recorded in mono.