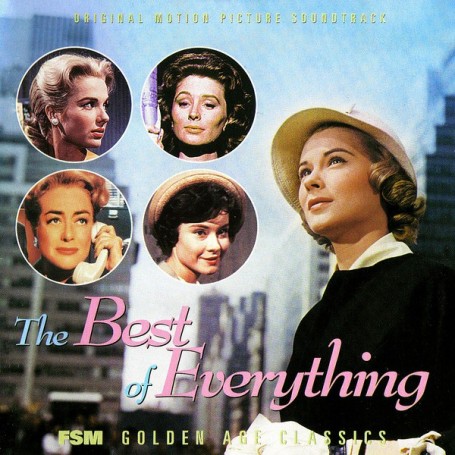 THE BEST OF EVERYTHING

Alfred Newman's tenure at Twentieth Century-Fox ranks him as the greatest of the great studio music directors. He was a skilled composer, a legendary conductor and a tireless administrator who brought excellence to all aspects of Fox music for two decades. But all good things must come to an end and in January, 1960 Newman left the studio for the freelance world, where he worked for the last decade of his life.

The Best of Everything (1959) is Newman's last score at Fox and one fondly recalled by Golden Age aficionados. The film is an ensemble look at the working world from a woman's point of view, with a sprawling cast including Hope Lange, Stephen Boyd, Joan Crawford, Suzy Parker, Robert Evans, Martha Hyer, Diane Baker and Louis Jourdan. Newman's score covers the film with a romantic mist of longing and nostalgia, making wide use of two main themes: one a optimistic title song (with lyrics by Sammy Cahn, performed by Johnny Mathis), the other a melancholy, bittersweet melody often carried by piano. The two themes are scored in a variety of treatments, from fully symphonic to small-ensemble jazz, with the piano theme slowly developed into an "obsession" motive as madness overtakes one of the characters. Newman also provides a rich handful of original themes and passages for the story's supporting characters.

FSM's CD restoration features the complete score remixed in stereo. Following Newman's music is a bonus section of the film's source cues, a rare instrumental demo of the theme, several cues repeated in mono (for which the stereo masters—also included in the main program—have sustained deterioration), and even an example of the film's temporary music ("Street Scene"). For fans of Alfred Newman, it is the "everything" of The Best of Everything!

The Best of Everything