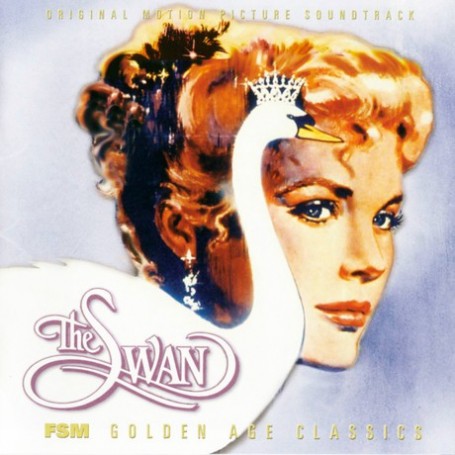 The Swan (1956) was a romantic fairy tale set in early 20th century Europe, based on a play by Ferenc Molnar. Grace Kelly starred as a young princess whose desperate mother hopes to betroth her to the crown prince, Alec Guinness. However, Guinness's visit leads to a romantic triangle with the third leg being the palace tutor, Louis Jourdan—a commoner. What starts as a comedy of manners becomes a bittersweet romance and ultimately the coming-of-age story of Alexandra—who accepts her role in society as a rarified "swan."

The Swan was Grace Kelly's penultimate film role, which eerily foreshadowed her own destiny as Princess Grace of Monaco. The film features fine performances, gorgeous architecture (including location footage filmed in a North Carolina mansion) and splendid M-G-M production values—including a heartfelt and evocative score by Bronislau Kaper.

Kaper considered The Swan to be one of his finest projects, as if its fairy tale atmosphere rekindled his childhood memories of pre-war Europe. He ably matched its many moods, providing a shimmering, beautiful waltz for Kelly; light and frothy music for the affairs of the royal palace; an adapation of the Hungarian "Rakoczy March" as Guinness's theme; and lengthy, romantic passages for the deepening drama. His score is at turns noble, whimsical, melancholy and magical.

Kaper's score for The Swan (conducted by studio music head Johnny Green) was released on LP at the time of the film. This premiere CD features the complete original soundtrack in stereo, remixed from the original three-track masters; as well as the passages recorded specifically for the album, in monaural sound, as they were recorded (consisting of "Theme From The Swan" and brief transitions).