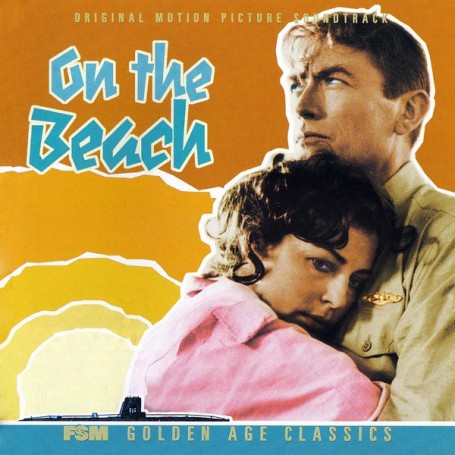 ON THE BEACH / THE SECRET OF SANTA VITTORIA

FSM tackles a film composer gravely unrepresented on CD with a doubleheader by Ernest Gold: On the Beach (1959) and The Secret of Santa Vittoria (1969), both films directed by Stanley Kramer, with whom Gold shared his most fruitful collaboration.

On the Beach is an "event" picture dealing with the deadly aftermath of a nuclear war: Gregory Peck, Ava Gardner, Anthony Perkins and Fred Astaire star among the last survivors of humanity, waiting for a radioactive cloud to engulf them on the Southern coast of Australia. The film was the first to depict the serious consequences of nuclear war and cemented Kramer's reputation as a "message" filmmaker.

On the Beach was Ernest Gold's first major picture after toiling on "B" movies for over a decade, and he responded with a gorgeous, symphonic score. He used as his main theme (per Kramer's wishes) the traditional Australian song "Waltzing Matilda," but developed it into multiple, ingenious variations -- everything from an anthem for humanity, to a love theme, to a dirge for the end of the world. The composer wrote two love themes for the film's romantic subplots, and adventuresome, Herrmannesque scoring for a submarine mission to the dead coast of California.

Ten years after On the Beach, Kramer and Gold collaborated on The Secret of Santa Vittoria, a period comedy starring Anthony Quinn in which a rustic Italian village hides a million bottles of wine from the German army during the closing days of World War II. Gold's score is a melodic slice of "Italiana," complete with a love theme (performed in Italian and English by Sergio Franchi), joyous celebration cues, suspenseful Nazi march, and mammoth setpiece (for the hiding of the wine).

FSM's CD premiere features the stereo LP configurations of both On the Beach (for which the complete session tapes are lost) and The Secret of Santa Vittoria (for which the original soundtrack exists only in mono and would not fit on the CD; the stereo LP is a re-recording faithful to the film orchestrations). The Santa Vittoria portion adds a previously unreleased instrumental version of the main theme. The illustrated 24-page booklet includes detailed liner notes and rare color photographs from On the Beach (a black and white movie).

The Secret of Santa Vittoria