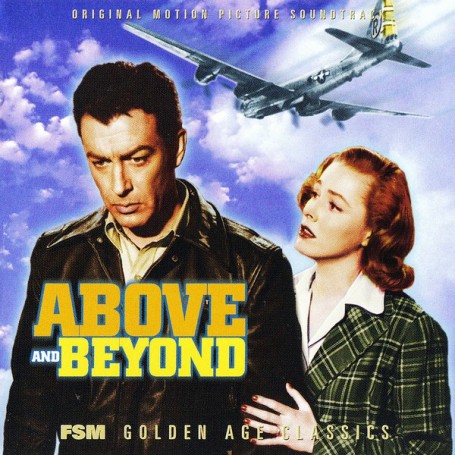 Above and Beyond (1952) tells the story of Paul Tibbets, the Air Force pilot who led the mission to drop the atomic bomb on Hiroshima and thus end World War II. More than a wartime docudrama, the M-G-M film dramatizes the American domestic experience of the time, with Paul Tibbets (Robert Taylor) fighting to end the war while his wife Lucy (Eleanor Parker) fights to save her family.

Above and Beyond features a strong, sterling score by Hugo Friedhofer, no stranger to the war genre with his Academy Award-winning music to The Best Years of Our Lives (1946), and solid efforts like Between Heaven and Hell (1956), The Young Lions (1958) and In Love and War (1958) yet to come. The score features Friedhofer's brand of Americana crafted from his admiration for composers such as Copland and Gershwin, and also the progressive sonorities of Vaughan Williams and Hindemith. The score is of a piece, but also full of memorable horn calls, marches, melodies of love and devotion, and an ominous chordal motive for the bomb itself.

Capping all of the melodies is a dynamic main title which would not be out of place in a contemporary film such as Air Force One. Friedhofer was an astute dramatist whose progressive sensibilities set the stage for future composers like Goldsmith and Williams; the main title to Above and Beyond is one of his greatest compositions.

Although originally recorded in stereo, Above and Beyond, one of only a handful of scores Friedhofer composed at the studio, is presented in complete, chronological form in the best possible monaural sound, as the stereo reels were discarded in the 1960s. The liner notes are by film music scholar and Friedhofer expert William H. Rosar.