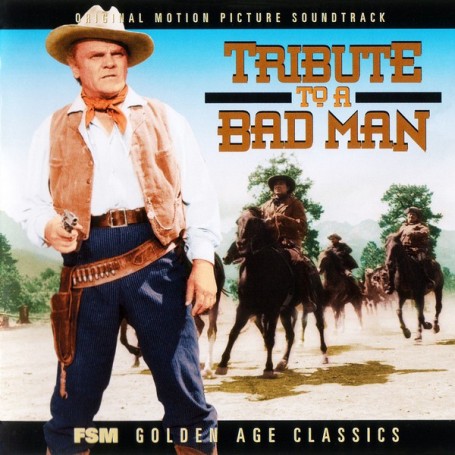 TRIBUTE TO A BAD MAN

Miklós Rózsa scored every kind of film during his long and storied Hollywood career: biblical and historical epic, romance, film noir, drama, science fiction—and even western. Tribute to a Bad Man (1956) is his uniquely "Rózsa-esque" take on the American plains for a CinemaScope "psychological western" directed by Robert Wise: James Cagney stars as an iron-willed horse rancher whose vigilante sense of justice threatens to destroy the personal relationships around him.

Rózsa, far from his native Hungary, claimed to be uncomfortable in the uniquely American genre, but was more than capable of concocting the kind of grandiose and melodic strains associated with the West. His main theme is a sweeping match for the gorgeous Colorado photography, and his smaller cues match the characters' emotions while maintaining a sense of the 19th century American frontier.

Rózsa was not entirely on foreign (to him) ground: The female lead in the movie (Irene Papas) is a Greek immigrant, and Rozsa adapts a Greek folk song, "Pandrevoun," to serve as the love theme, giving him an Eastern European hook in the otherwise American idiom. As the film takes on an aggressive, psychological dimension towards its climax, Rozsa utilizes his film noir style of brooding anxiety, before returning to the American material in his soaring end title.

Tribute to a Bad Man has long been a favorite score by Rózsa's many admirers. It is here presented in its premiere release in complete form from the original stereo masters.

Tribute to a Bad Man