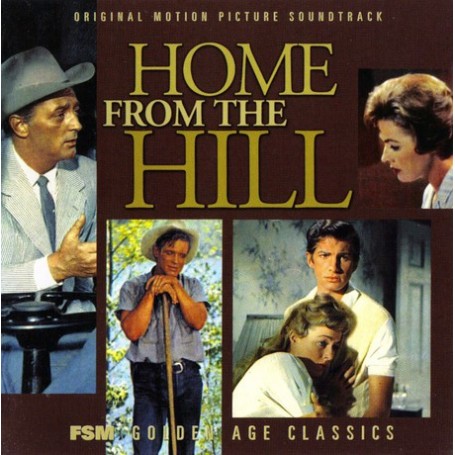 HOME FROM THE HILL

Home From the Hill (1960) is a Southern family drama featuring a quartet of excellent performances: Robert Mitchum as a powerful Texas patriarch; Eleanor Parker as his brittle wife; George Hamilton as their sheltered son; and George Peppard as Mitchum's worldly (but illegitimate) other son. Masterfully directed by Vincente Minnelli, the film features glossy M-G-M production values on the one hand, and beautifully handled restraint on the other, with each character presented in a sympathetic light even as the plot drives them into inexorable conflict.

The score to Home From the Hill is one of the masterpieces of Bronislau Kaper (The Prodigal, Mutiny on the Bounty), an accomplished composer with a gift for melody. Born in Poland and raised in Europe, Kaper was one of several emigrant composers who ironically had a gift for evoking the American heartland. His themes for Home From the Hill seem as timeless as the land itself and as belonging as the Southern hospitality of the characters. He weaves through the film's interconnected maze of relationships, evoking love—both familial and romantic—as well as tension and violence: first for a dangerous wild boar hunt, and later a climactic manhunt.

George Peppard said of his role in the film: "There's a long scene in Home From the Hill where the camera stays on me...People are always saying what a fine piece of acting it was. Actually, I didn't do anything but walk and stare ahead. All the acting was done by Kaper." It is one of the finest compliments ever paid to a film composer, and most deserving in the case of this special score.

FSM's premiere release of Home From the Hill features the complete underscore including four alternate selections. It is remixed in stereo from the original 35mm masters, with the exception of five passages recorded on 17.5mm monaural film at a later scoring session.

Home From the Hill