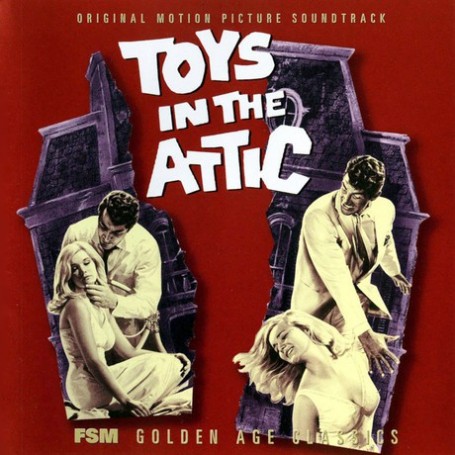 TOYS IN THE ATTIC

FSM spotlights a wonderful Golden Age composer seldom represented on CD: George Duning (1908-2000), a stalwart of Columbia Pictures (From Here to Eternity, Picnic, The Eddy Duchin Story) who later excelled in television (he scored the most romantic episodes of Star Trek). Presented here is one of Duning's most outstanding dramatic scores, Toys in the Attic (1963), his only picture for United Artists.

Toys in the Attic was based on a play by Lillian Hellman and directed by George Roy Hill, starring Dean Martin a perennial failure who retreats to his childhood home in New Orleans and spinster sisters (Geraldine Page and Wendy Hiller) when times get rough. The sisters actually derive great pleasure from comforting Julian, and it is the man's success (both in business and with his new bride, Yvette Mimieux) that ironically leads to tragedy.

Duning's score for Toys in the Attic is melodic and memorable, with a bluesy main theme (one of Duning's finest) and sweetly nostalgic Americana for the loving (if problematic) personal relationships. The "Southern family" genre led to exceptionally fine scores from composers such as Alex North (A Streetcar Named Desire) and Elmer Bernstein (Summer and Smoke), and Duning matches their sensitivity (using his own style) with rich and melancholy music, becoming dissonant only as the characters themselves push into obsession and desperation.

This premiere CD of Toys in the Attic has been mastered from the original 1/2" stereo masters, recorded at the famed Goldwyn Scoring Stage in Hollywood. The album presents the chronological assembly planned by the composer and Tony Thomas but never commercially released, followed by jazzy source cues, a brief suite of additional and alternate underscore, and a rare single (vocal and instrumental) of the main theme. Liner notes are by Jeff Bond and Lukas Kendall.

Toys in the Attic