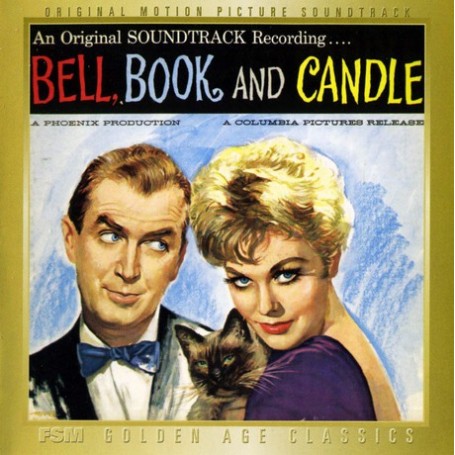 Bell, Book and Candle was a popular comedy starring Jimmy Stewart and Kim Novak in a sly take on contemporary Manhattan witchcraft: Novak is a lonely witch, and Stewart her romantic target, with supporting turns by Jack Lemmon and Ernie Kovacs. Based on a play by John Van Druten, the film was a change of pace for Stewart and Novak, whose other film that year featured a very different type of romance (Hitchcock's Vertigo).

Bell, Book and Candle was one of George Duning's favorite projects, allowing him to exercise his gift for melody, romance, and jazz (in several source cues featuring The Candoli Brothers on trumpet). Duning was always at his best with romantic elements, and the film's fantasy aspects allowed him to extend his musical imagination into colorful depictions of witchcraft.

1001 Arabian Nights was an animated feature film starring Mr. Magoo (voice of Jim Backus), here "Abdul Azziz Magoo," the uncle to Aladdin, as in "Aladdin and the magic lamp." The film was animated and produced by UPA Pictures, and received a splendid, colorful score by Duning, who wrote three songs with lyricist Ned Washington: "Magoo's Blues," "You Are My Dream" and "Three Little Maids From Damascus."

Duning enlisted several "ethnic" musicians to depict the Middle Eastern locale, incorporating them into a traditional symphonic setting. Despite the fact that it was written for animation, the album (presenting the film's lengthier cues and musical setpieces) has little "mickey mousing" and sounds like it could be the score to a live-action fantasy film.

FSM's premiere CD of these two soundtracks comes from the Colpix Records album masters. 1001 Arabian Nights was released in stereo in 1959; Bell, Book and Candle, however, was only issued in mono in 1958, and did not premiere in stereo until a 1980 Citadel LP reissue. FSM has gone back to the three-track Colpix stereo album masters for the best-ever presentation of this classic score, including the "bonus track" (here correctly titled and placed as track 9) from the Citadel reissue. New liner notes by Daniel Champion are presented along with the original LP commentaries.