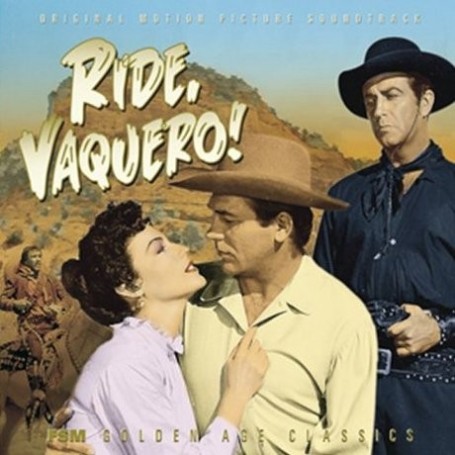 This CD features two previously unreleased scores from M-G-M westerns: Ride Vaquero! by Bronislau Kaper and The Outriders by Andre Previn. Both films follow protagonists who start out on the wrong side of justice, and through romantic pursuits find redemption—but not without violent confrontation of their former allies. The scores are dynamic, melodic and dramatic—perfectly suited to the dark stories and the mythic grandeur of the West.

Ride Vaquero! (1953) starred Anthony Quinn as a fiery Mexican bandito, Robert Taylor as his enigmatic right-hand man, and Ava Gardner as a beautiful settler's wife. Bronislau Kaper's stirring score follows in the footsteps of Alex North's dynamic Viva Zapata! (also featuring Quinn) in its jaunty rhythms and Mexican flavor, with prominent use of guitar and mariachi-style trumpet. The score evokes Mexican culture through the use of authentic folk melodies, which combined with Kaper's original themes—presented in thundering action cues as well as introspective moments—makes for a stirring listen, one of Kaper's finest genre scores of the 1950s.

The Outriders (1950) was a Civil War western starring Joel McCrea, Barry Sullivan and James Whitmore as three escaped Rebel soldiers who are enlisted by a band of Southern guerrillas to steal a shipment of Northern gold. The score by 21-year-old André Previn evokes the breadth and excitement of the West without sounding necessarily Coplandesque. A stunningly mature work technically, it features a certain youthful exuberance in its majestic main title theme and uncompromising symphonic action.

FSM's premiere release of both scores features the complete dramatic score to Ride Vaquero!—with a bonus section of source music—and the surviving underscore from The Outriders (one-half lost due to the era in which it was recorded). The entire CD is in good monaural sound. Liner notes are by Lukas Kendall.