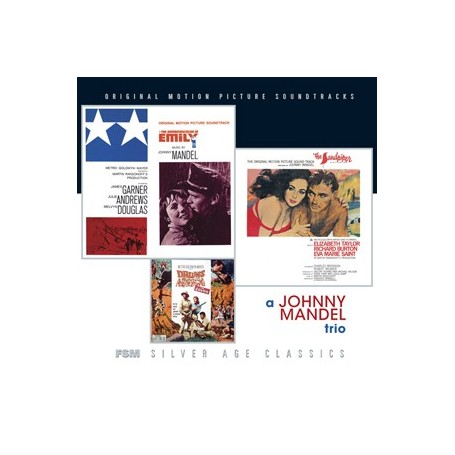 THE AMERICANIZATION OF EMILY / THE SANDPIPER / DRUMS OF AFRICA

The great Johnny Mandel gets his due with this 3CD set featuring three of his classic scores for M-G-M. Go here for the free online notes for this title.

The multitalented Mandel is a legendary composer, arranger and songwriter who in the 1960s was one of the freshest voices for the screen. He came from the jazz world and specialized in intimate, lovely and poetic scores, two of the best presented here: The Americanization of Emily (1964) and The Sandpiper(1965). His ability to craft a melody to a film, and to arrange it with a characteristically transparent sound (often spotlighting woodwind solos), was renowned especially by his fellow musicians.

The Americanization of Emily is a war (or, arguably, anti-war) film starring James Garner an American Navy attaché (and self-described coward) during World War II who falls in love with a war widow played by Julie Andrews. As their philosophies conflict, and Garner is thrown into a perilous situation on D-Day, the film blends drama, romance and satire in a way seldom achieved with such success (the brilliant screenplay was by Paddy Chayefsky). Mandel’s score is a gem featuring a lovely waltz theme for Andrews’s character (given lyrics by Johnny Mercer and recorded as “Emily”), ironic-sounding military music and heartfelt dramatic scoring. How Mandel managed to balance the film’s changing tones—from comedy to drama to romance—is a marvel.

The Sandpiper is the source for one of the greatest songs ever composed for film, “The Shadow of Your Smile” (lyrics by Paul Francis Webster). The film stars Elizabeth Taylor and Richard Burton and was directed by Vincente Minnelli in what was billed “an adult love story” set at Big Sur, California. While the film has a reputation for soapy melodrama, Mandel’s score is a masterpiece of jazz and romantic scoring, centering on the song melody but encompassing an array of ineffable moods, led by the unparralled trumpet work of Jack Sheldon. Doug Schwartz, the mastering engineer for this and most FSM CDs, remembers his father, woodwind player Wilbur Schwartz, coming home from the first recording session ofThe Sandpiper and making this comment: “I just worked on the greatest music of my career.”

A third film on this collection is little-known but offers an opportunity to hear Mandel tackle a genre for which he is not known: Drums of Africa (1963) was a B-movie adventure starring Lloyd Bochner, Frankie Avalon and Mariette Hartley mixing it up with African slavers amidst stock footage. Mandel used a reduced orchestra for budgetary purposes (heavy on the percussion) but gave a melodic, jazzy bent far removed from the typical B-movie score of the era. He made use of his characteristic woodwind solos as an evocative way of “speaking” for the animals encountered in the story. The score interpolates a song, “The River Love” performed twice in the film by Avalon and composed by Russell Faith and Robert Marcucci.

This 3CD set is entirely in stereo and has been newly remixed and remastered from the original three-track 35mm scoring masters. Disc one features The Americanization of Emily (expanded from the Reprise LP); disc two is a complete presentation of The Sandpiper; and disc three features Drums of Africa as well as a recreation of the Sandpiper soundtrack LP (which was produced by Quincy Jones). Liner notes are by Deniz Cordell incorporating new interview comments by Mandel as well as Jack Sheldon. Due to the amount of research and writing, the 32-page booklet features essays on the films and scores; the track by track commentaries can be found—for free—at FSM’s online notes.

The Americanization of Emily