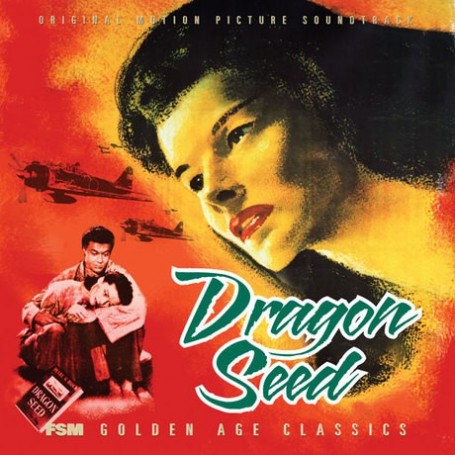 Dragon Seed (1944) was based on the 1942 novel of the same name by Pearl S. Buck. Like her Pulitzer Prize-winning The Good Earth (filmed by M-G-M in 1937), it is set in the turbulent world of China just before and during World War II and—like its predecessor—tells a story of family and personal tragedy set against an epic background of political struggle and armed conflict. M-G-M lavished an impressive and expensive physical production on the film, budgeted at an unprecedented three million dollars. Katharine Hepburn headed the A-list cast.

The studio similarly drew on top-drawer talent by assigning its finest musical dramatist, Herbert Stothart, to score the film. Stothart had already scored The Good Earth, and for Dragon Seed he created another strong, effective score rife with Asian color and lavish themes—including authentic folk tunes and national anthems. Stothart made extensive use of pentatonic scales and what were then considered “orientalisms,” but stamped the music with his own blend of lyricism and dramatic pulse that is sometimes tender, sometimes explosive, and always apt.

Due to the existence of dual microphone perspectives, FSM has been able to mix nearly all of Dragon Seed in genuine stereo. The sound quality utterly belies its age (over 65 years old). This 2CD set contains not only Stothart’s complete score, but numerous bonus tracks, including the trailer music and an alternate English-language version of the main title. The edition, limited to 1,000 copies, includes notes by Frank K. DeWald and Alexander Kaplan, numerous film stills and publicity materials in a 20-page booklet designed by FSM’s Joe Sikoryak.

DISC ONE
Opening Title/This Is the Valley of Ling 4:42
The Youngest Son 1:32
To Find Jade 1:07
Home From the Meeting 3:04
The Magic Pictures 1:30
My Shadow/I’ve Found You Waiting/A Farmer Buys a Book 6:04
Student Uprising 2:01
Teach Me to Read/We Shall Be Ancestors 5:38
The Flying Birds Bewilder Them 1:29
Annihilated Village 1:41
Grandfather Speaks 1:02
They Seem to Have a Plan/These Are the People (Chee Lai) 3:56
Rain Came/Take Your Places/The March Begins/I Miss Them/The Enemy Came Closer 7:07
Get to Your Homes 2:48
Orchid Ravished/Sounds of Death/Sign of Wu Lien 8:11
Chinese Quisling 0:56
Through the Elements/Some Met Death/The Cord Is Red/The Seasons Bring a Grandson Part 1 7:24

The Seasons Bring a Grandson Part 2/The Call for Volunteers 4:18
Dealing With the Enemy/This Is the Beginning/All Men Are Brothers 4:06
Visit to Parents 2:36
Contempt 1:37
Are You Afraid?/Traitor/Buying Poison 4:13
My Husband’s Handiwork/Sweets With Opium 1:46
Are You With Us? 1:31
We Are Not Dogs 1:23
Jade Discovered/The Death of Wu Lien 3:40
Reflection/Summer Was Gone 2:57
I Can Kill 1:42
A Cloud Covers My Mind/Mark the Land/Men Who Love Peace/It Is Time Now/Flames for China/Final Episode/Coda 11:54