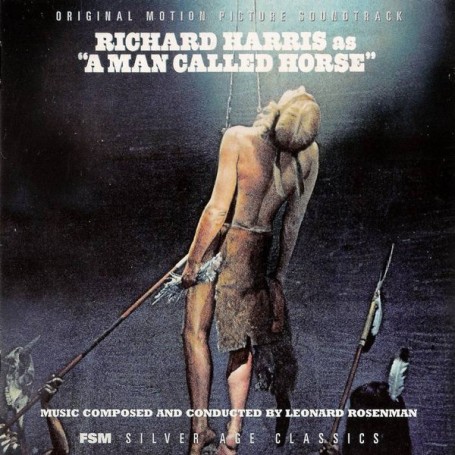 Film Score Monthly presents another extraordinary, groundbreaking score by film music pioneer Leonard Rosenman. Elliot Silverstein’s A Man Called Horse (1970) chronicled the progress of a “civilized” Westerner finding purpose among a “primitive” culture. The film starred Richard Harris (Man in the Wilderness) as John Morgan, an English lord captured, tortured and humiliated by Native Americans from the Sioux tribe in 1825. Morgan eventually earns the respect of the tribal chief and even undergoes the brutal Sun Vow ceremony to become a Sioux warrior.
With unprecedented cooperation between the production and members of the Rosebud Sioux Reservation, producer Sandy Howard tried to give the film an authentic cultural presentation (although the lack of Native American records prior to 1870 made it a challenging task). A corresponding attempt at authenticity was made in the film’s musical score.

Leonard Rosenman’s music for A Man Called Horse is a remarkable achievement, written in the composer’s distinctive modernist voice. Throughout the score, Rosenman employs Sioux chanting and quasi-Native American instrumentation (percussion, recorders and flutes) for a far more authentic sound than typically heard in Hollywood westerns. In 1970, bowdlerized “Indian” clichés were all that most audiences had heard in Hollywood productions; in this context, Rosenman’s score is a breath of fresh air, representing a sincere attempt to do justice to Sioux culture. He uses the orchestra to drive and shape the Native American-flavored vocals and percussion in a way that had virtually no antecedent in mainstream American films.

Music from A Man Called Horse was originally issued on a Columbia Records LP, featuring six long underscore suites arranged, not in film order, but for home listening. This premiere CD release of the complete score includes the entire LP sequence in stereo (from the original album masters) plus bonus tracks of previously unreleased Rosenman cues—some transferred from 1” 8-track masters and the rest taken from monaural masters archived at UCLA (home of the CBS music archives). The CD also features a number of percussion and ambient Sioux source cues recorded by both Sioux performers and Hollywood musicians.

The booklet includes detailed notes on the film and its music by Jeff Bond and Lukas Kendall, film stills selected by designer Joe Sikoryak, and the original LP liner notes.

Music Composed and Conducted by Leonard Rosenman
The Capture and Enslavement of John Morgan 7:50
John Morgan Becomes an Indian 5:44
Many Years Pass 5:38
The Battle of the Shoshone 5:11
The Death of Running Deer and the Departure of John 3:29
Finale 1:53